Is iPhone 6s Waterproof? Video Test Shows It Can Survive For An Hour Underwater

As Apple has added features to the iPhone over the years, there has historically been one particular tick box that the company has refused to check off, and that’s water resistance. While the competition from the likes of Sony and some other manufacturers have been adding water resistance to their smartphones for a little while now, Apple has refused to follow suit.

When the iPhone 6s and iPhone 6s Plus were announced a couple of weeks ago, some of us wondered whether 2015 would be the year which saw water resistance come to the iPhone, but alas it wasn’t to be. At least, not according to Apple’s official iPhone 6s or iPhone 6s Plus specifications. 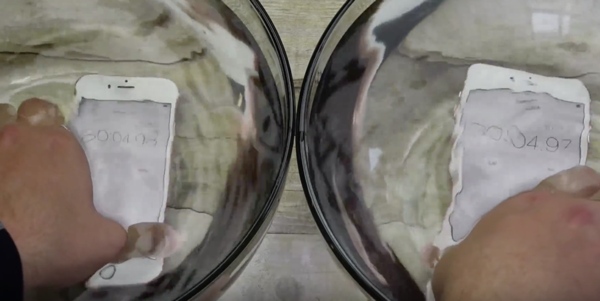 That didn’t stop one YouTuber from seeing what would happen when both of Apple’s new flagship handsets were left submerged in water for no less than 60 minutes. That time is no accident, with the official water resistance rating having devices have to withstand water for an hour in order to get the required rating. So what would happen to Apple’s new top of the line iPhones when put through a similar test?

Surprisingly, not a lot.

As the video shows, both of Apple’s new iPhones stood up to the test remarkably well. In fact, having spent a full hour in a bowl of water both devices continued to work just as they did before they went in. The cameras worked, with no sign of water spots within the unit itself, and the screen continued to work as it should. Again, there was no sign of water having found its way into the iPhones at all. Furthermore, the headphone jack and Lightning port both are reported to have continued working once the device was dried out, which by our reckoning means the new iPhones are pretty much water resistant regardless of specification.

Now that doesn’t mean you should rush to take your iPhone into the shower or even splash it while doing the dishes, but if this test is anything to go by, it’s safe to say you’ll be just fine using the thing out in the rain.

What we don’t quite understand is why Apple wouldn’t shout about making its iPhones water resistant. That alone suggests to us that it hasn’t made them water resistant at all, making this video all the more interesting!