The Apple Watch is, for many, a wishlist item. Some are unable to afford a smartwatch costing several hundred dollars, while many countries don’t even have the thing available to order as yet, and even throughout the handful of launch nations, scores of consumers are still waiting for shipments to arrive in the post. Despite the current state of affairs, there has still been a steady stream of durability videos testing the resolve of the wrist computer, and while some have offered genuine value in gauging the ruggedness of the device, many others have been compiled just because. If you derive entertainment from witnessing the wanton destruction of highly sought-after gadgets, then the clip below should feed your appetite.

Even if the Apple Watch is out of reach for you right now, it’s hard not to take a perverse kind of pleasure in seeing a meticulously-crafted, high-end gadget being blown to pieces in milliseconds. When one considers the time and effort that has gone into the research and production of the Apple Watch, these destruction videos remind us that personal tech is not invincible despite its unprecedented influence on our lives, and one would find it hard to locate a more appropriate tool for the job than a .50-caliber weapon. 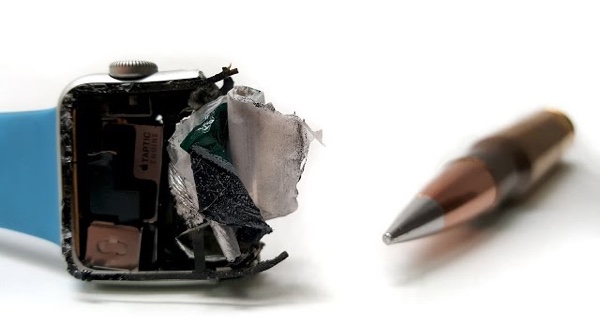 The term “overkill” is used frequently in the tech industry while, say, questioning the need for more than half a dozen cores in a smartphone, but in the case of a new video released by the self-styled ‘Tech Assassin’ Richard Ryan, we can safely assess that the bullet used was much more than enough to shorten the lifespan of the Apple Watch Sport being put out of its misery.

There’s no doubt that even the lower-end Apple Watch Sport is well-built, and while this video does make a bit of a mockery of the device, the toughened aluminum and Ion-X-bolstered glass construction makes for a pretty formidable team. No matter how much the Apple Watch evolves in time, we can safely say that it will never be able to stand up to such a strong weapon, but I don’t think we’re alone in suggesting that a FaceTime camera, rather than bulletproofing, should perhaps be on Apple’s to-do list for the second-gen model.