Strategy Analytics has once again published its latest numbers, highlighting some interesting information about Apple and estimated Apple Watch performance.

Apple as a company doesn’t publish the granular Apple Watch sales statistics at all, preferring instead to group the device into a category with other products and services. However, this latest published information suggests the Cupertino-based company shifted 3.5 million Apple Watch units during the last quarter.

In addition to highlighting information about Apple Watch, the Strategy Analytics information also gives us a decent insight into the progression of the wearables market in general in which Apple is now the biggest player with a 16-percent share of the global market. During the first quarter of 2017, the global wearables market expanded by 22 million units. Within that increase, Tim Cook’s Apple benefited from the biggest growth by increasing its Apple Watch shipments from 2.2 million units to the aforementioned 3.5 million. That progression catapulted the company into the position of being the global wearables leader.

A lot of that success has been attributed to the strong sales performance and market demand for Apple Watch Series 2. Where one company rises, it always seems to be that another business needs to fall to make way for those new successes. In this instance, it seems that Fitbit is the company to fall having lost a portion of its market share. During the same quarter, Fitbit saw its shipments drop from 4.5 million in Q1 2016 to 2.9 million in this year’s first quarter.

Strategy Analytics blames this on “late entry to the emerging smartphone market” amongst other things. 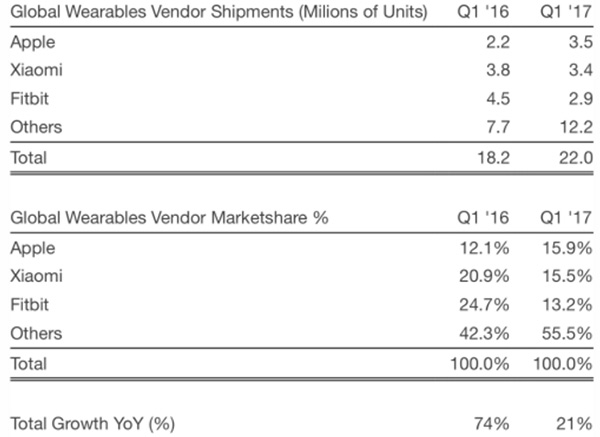 Interestingly, after previously being number one globally for wearables, Fitbit has now fallen to third place behind Apple and Xiaomi, the latter with a 15.5-percent market share. Neil Mawston, Executive Director at Strategy Analytics, comments on the figures:

Apple captured 16 percent global marketshare and overtook Fitbit to become the world’s largest wearables vendor. The new Apple Watch Series 2 is selling relatively well in the US, UK and elsewhere, due to enhanced styling, intensive marketing and a good retail presence.

With other companies starting to feel the competitive nature of the wearable market, you get the feeling that Apple is only really getting started with Apple Watch.