Strong demand for the Apple Watch Series 6 means that Apple also saw its overall market growth at a rate of 50% YoY.

Apple’s market share grew by 3% as a whole while Samsung saw its own shipments increase by more than a quarter over the year prior. It’s thought the Galaxy Watch 3 and Galaxy Watch Active Series were the main drivers there.

Apple was able to further solidify its leadership position in the market by widening the portfolio from Watch SE to Series 6 at the right time. This may drive Samsung to launch a mid-price-tier model to boost growth,” said senior analyst Sujeong lim.

When we look at smartwatch platforms, watchOS makes up a third of the market thanks to the increasing attach rate for iPhone sales. There are a billion iPhones in use around the world now and that’s a huge number of potential Apple Watch buyers. However, Google and Samsung are both working together to try and combat watchOS with an updated Wear OS release. 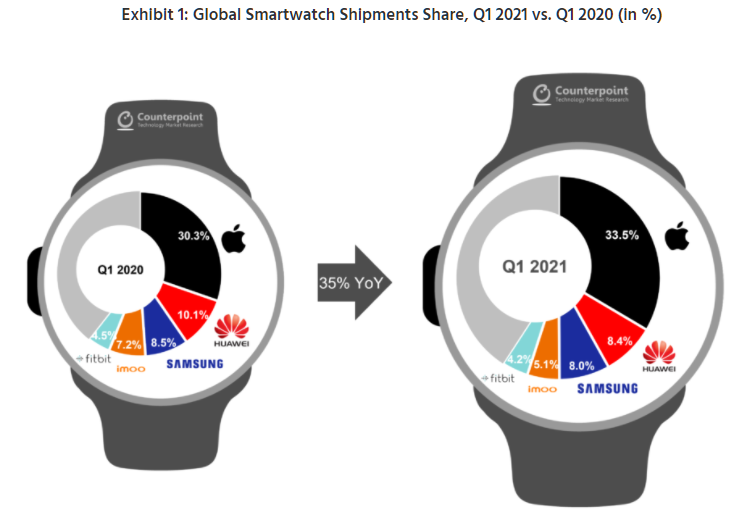 “This is a great move by Google to accelerate its ambitions for the wearables space. It can build a robust portfolio of Wear devices integrating the best of all the three worlds – Tizen OS, Wear OS and Fitbit OS. The consolidation brings more power to Google’s Wear platform and will attract more developers to build newer experiences for the wrist,” said VP Researcher Neil Shah.

Apple is very likely to announce the Apple Watch Series 7 later this year, potentially with new blood glucose monitoring and other features.