Apple is planning on adding third-party music streaming service support to its Siri-powered HomePod smart speaker. The mac-maker hasn’t provided intricate details as yet, but a WWDC presentation slide clearly shows the intention.

If the WWDC presentation slide is accurate – and there is no reason to believe it won’t come to fruition – then HomePod owners may soon have a choice of which music platform they adopt.

HomePod owners are currently able to stream music through services like Spotify if they use a middle-ware protocol to connect a streaming device to the HomePod itself as a speaker. Any music-based questions asked to Siri on the HomePod hardware – such as “Hey, Siri, play music by Eminem,” will automatically be directed to Apple’s Music platform. Presumably, once Apple opens this up and other providers adopt Apple’s newly open APIs or integrations, a HomePod owner will be able to specify the exact service that they want to consume the music through.

Amazon has had amazing success with its Echo range. Partly because of the price of the hardware, but also because consumers actually have a choice of which music service they want to subscribe to and use; they aren’t purely locked into using Amazon Music natively. Apple has shown an interest in extending the HomePod range to try and gain a larger market share in that particular industry so it makes perfect sense that the company has recognized the need to give owners a choice rather than locking them into its own service. 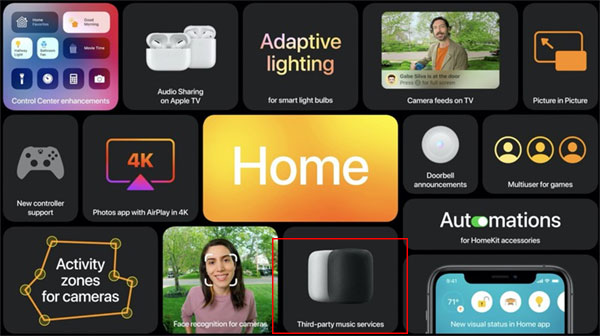 At the time of writing, there are no timelines in place for this change. It’s also unclear which companies will adopt this new feature and whether or not Apple will try and claim a modicum of control over who it opens up the APIs to. For example, will other audio apps and services be granted access to this feature, such as podcast apps that compete with Apple’s own app? Only time will tell as the specifics become clear.