Apple Inc. has released an all-new TV advertisement for their iPad 2 device. 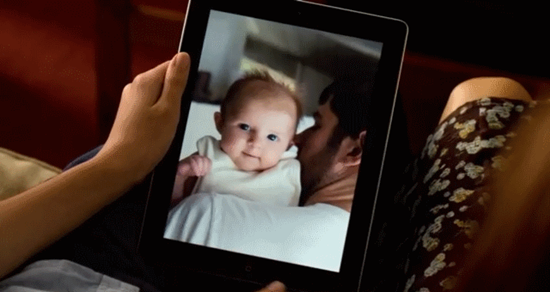 The new ad is titled We’ll Always and it showcases plenty of iPad’s excellent features that make it the best and most popular tablet on the market.

The ad starts with a user opening up Photos.app to see photos of what appears to be the user’s children and spouse. The next scene shows another user reading a book on their iPad with the iBooks.app. Moving on, we see a person cooking while consulting their iPad for recipes with The Photo Cookbook, a person enjoying a Sox vs. Tigers game with the MLB app, having a meeting online with Fuze HD, editing a movie with iMovie and lastly – our favorite part – Apple cleverly, well, promoting OS X Lion with Alphabet Fun.

One can certainly not deny how the iPad has changed things. While tablets existed before 2010, there were never as easy to use, yet, at the same, as powerful as the iPad is. Sure, you still cannot play Crysis on it, but it pulls off all everyday activities like browsing, video chatting, viewing documents, sending and receiving emails etc. with finesse.

The original iPad, when it was announced in 2010, spurred a revolution in the consumer electronics industry. While critics sidelined it as “just a big iPod touch”, that “big iPod touch” label is exactly what made it so popular.

Have you ever played Angry Birds on the iPad? I have and it’s a far better experience than on the iPod touch. A larger screen makes all the difference in the world!

With its economical price, abundance of apps and outstandingly simple user-experience, the iPad simply owns the tablet market: 8 out of 10 tablets sold in 2011 are iPads.

We’ll never stop sharing our memories. Or getting lost in a good book. We’ll always cook dinner and cheer for our favorite team. We’ll still go to meetings, make home movies, and learn new things. But how we do all this will never be the same.

And lastly, here is the ad itself:

Gotta love that soothing music the ad has playing in the background!