If you weren’t lucky enough to get to WWDC and take a seat at some of Apple’s sessions then you may have had to settle for getting to one of the company’s Tech Talks. Taking place throughout North America, Asia and Europe, the talks saw Apple’s evangelists take to the road in order to cover development of both apps and games for Apple systems.

Of course, when we say that you might have had to settle for the Tech Talks, that does the whole thing something of an injustice. By all accounts the talks are a great experience and very useful for those creating apps and games for iOS devices. The problem is that not everyone can get to a Tech Talk, even if it may be easier than making the pilgrimage to WWDC. 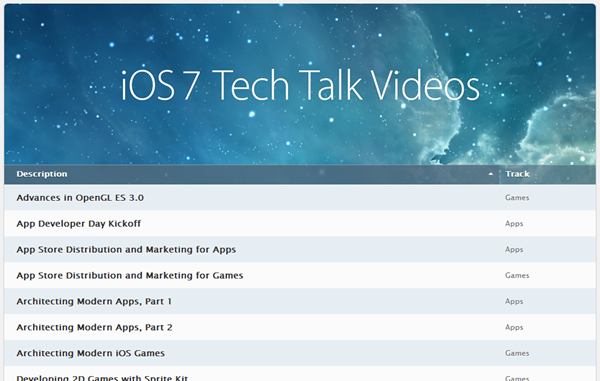 Thankfully for developers, Apple has today made its Tech Talks available to watch online for those with valid Apple developer accounts. In an email sent out to developers, Apple explained that the talks are aimed at those creating apps specifically for iOS 7.

Registered Apple Developers can watch full sessions from the iOS 7 Tech Talks to get in-depth guidance on developing for iOS 7. Discover how to create innovative, flexible, and intuitive apps that integrate the latest Apple technologies.

There are sixteen videos available to be watched via the Apple developer website, with subjects ranging from Open ES 3.0 to hidden iOS 7 development gems. Anyone building apps that will run on iOS 7 would do well to give the videos a glance at the very least.

As a little taster, here’s how Apple describes its OpenGL ES 3.0 video.

OpenGL ES provides access to the exceptional graphics power of the Apple A7. See how the innovations in OpenGL ES 3.0 deliver incredible graphics in games and other mobile 3D apps. Learn about advanced effects enabled by the latest API enhancements, and get specific tips and best practices to follow in your apps.

Anyone with an iOS developer account can get access to the videos, and the can either be streamed online, downloaded, or watched via the WWDC iOS app. If you’re watching online though, you’ll need a Mac and be using Safari as your browser.

You can access the videos by heading over to this link: developer.apple.com/tech-talks/videos/