Apple announced its first round of Macs powered by Apple silicon on Tuesday and while they won’t be available to customers until next week, one MacBook Air already appears to have been run through Geekbench.

The results are somewhat surprising, or given Apple’s claims, perhaps they aren’t.

Based on the Geekbench score that’s been bandied around today, the M1-powered MacBook Air scored 1687 in single-core and 7433 in multi-core tests. That doesn’t mean much in isolation, but compare that with the 16-inch MacBook Pro scores of 1096 single-core and 6870 multi-core, and things get mighty interesting.

In fact, the MacBook Air is now in the same territory as the base 2019 Mac Pro. And it doesn’t have any fans inside, just let that sink in for a moment.

We’ve seen the Mac Pro scoring around 1024 in single-core and 7989 in multi-core in Geekbench. Needless to say these numbers also blow past any chip Apple has ever made for its iPhone and iPad devices, including the powerful A14. 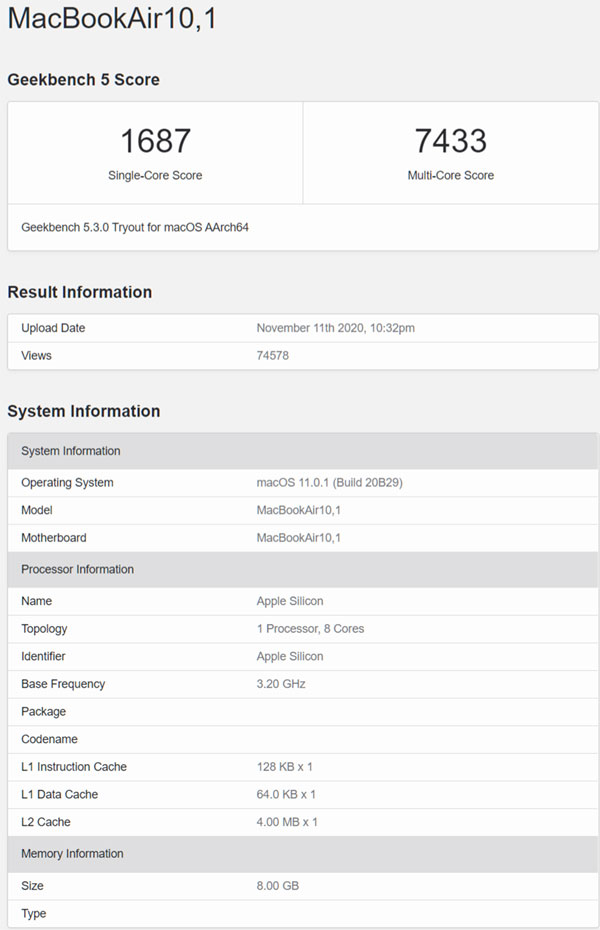 While these new machines are pretty great from what we’re hearing so far, the really interesting announcements will be the new 16-inch MacBook Pro, iMac, and either an iMac Pro or Mac Pro.

That’s some MacBook Air CPU. If true, that CPU would get you into the top few pages of Geekbench 5 single core results — in a fanless chassis — and it nearly doubles the A14's multicore results https://t.co/uostLE5sQb

Another comparison point: this M1 chip in the MacBook Air is within spitting distance of the entry-level Mac Pro pic.twitter.com/VxVCoIwhkR

Just thinking about what they could be capable of, with say, an M1X or M2 chip inside, is enough to whet the appetite.