After months of waiting Apple finally took the wraps off some new Apple silicon Macs, including the chips that power them. The new Apple M1 is the processor that will power new MacBook Air, MacBook Pro, and Mac mini devices and it’s a pretty speedy chip indeed.

What makes the M1 stand out is the way it manages to offer more power than previous comparable Intel chips while running cooler and using less power. In fact, it’s so cool that the new 13-inch MacBook Air doesn’t even need a fan inside.

“There has never been a chip like M1, our breakthrough SoC for the Mac. It builds on more than a decade of designing industry-leading chips for iPhone, iPad, and Apple Watch, and ushers in a whole new era for the Mac,” said Johny Srouji, Apple’s senior vice president of Hardware Technologies. “When it comes to low-power silicon, M1 has the world’s fastest CPU core, the world’s fastest integrated graphics in a personal computer, and the amazing machine learning performance of the Apple Neural Engine. With its unique combination of remarkable performance, powerful features, and incredible efficiency, M1 is by far the best chip we’ve ever created.”

The new M1 works in much the same way as the chips that power iPhones and iPad. Everything is on-chip, meaning GPU, RAM, and more are all on the same package.

That has performance improvement capabilities and we seem to be seeing that put to good use here. With eight CPU cores and eight GPU cores, this thing screams. 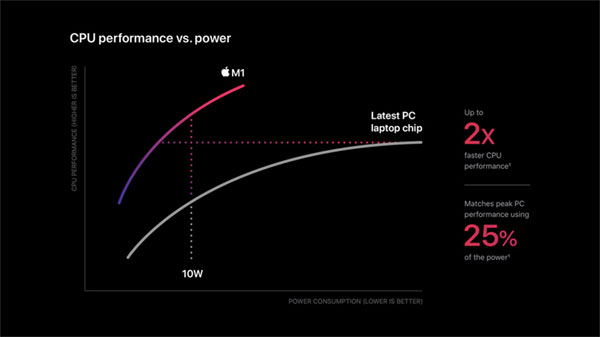 M1 features an 8-core CPU consisting of four high-performance cores and four high-efficiency cores. Each of the high-performance cores provides industry-leading performance for single-threaded tasks, while running as efficiently as possible. They are the world’s fastest CPU cores in low-power silicon, allowing photographers to edit high-resolution photos with lightning speed and developers to build apps nearly 3x faster than before. And all four can be used together for a huge boost in multithreaded performance. 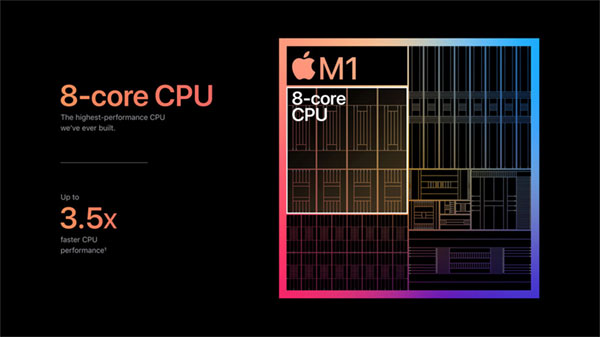 The new silicon will be available in essentially two configurations – one with 8GB of RAM, the other with 16GB. We’re still learning more about the chips but one thing is already pretty obvious – in terms of raw speed and power efficiency, the new M1 has Intel’s chips licked.