Schiller himself has now been moved on the page following his new “Apple Fellow” title change.

The change in titles was announced in August, although we’re told Schiller has been transitioning his role for some time now. Here’s how Apple describes Joswiak following his addition to the page.

Since joining Apple in June 1986, Joz has played a pivotal role in developing and launching some of the world’s most beloved consumer products, including the original iPod and iPhone. Joz began his career at Apple working on the early Macintosh computers and supporting the Mac’s community of third-party developers.

Joz has over 30 years of marketing and management experience at Apple, most recently as the vice president of Apple Product Marketing where he managed the product marketing and product management teams responsible for Apple’s entire product lineup. Joz graduated with a Bachelor of Science in Computer Engineering from the University of Michigan in 1986. 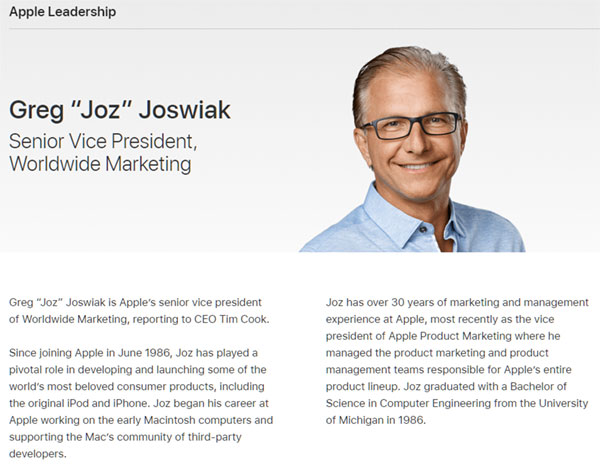 Schiller now finds himself as the very last name on the Apple Leadership page as he likely spends more time away from Apple and enjoys a much-deserved semi-retirement. He did say that he doesn’t intend to leave Apple when the announcement was made, however, saying that he will hang around for as long as Apple will have him.