Apple Granted Patent for Sensor that Recognizes Your Hands! Hints at Sensor-driven iPhones, iPads in Future

While there are dozens upon dozens of patents that Apple has been granted, very few reach the quirkiness of the patent that Apple was granted today. The patent handed out day is that of a handheld device (think: future iPods, iPads and iPhones) that use capacitive, resistive touchscreens as as well surface acoustic wave forms (wth?) to recognize your hands/fingers simply by the way you hold it. 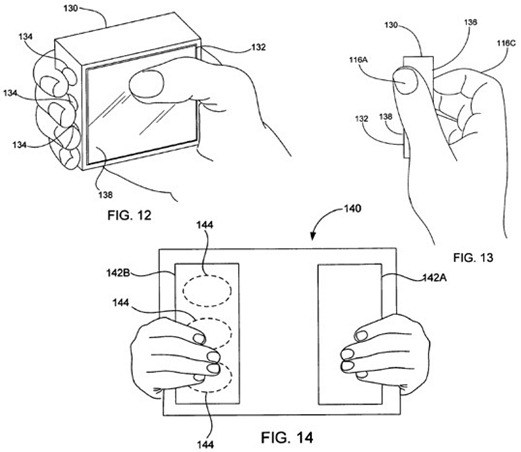 After recognizing, the device may then automatically switch to your previously-personalized settings. These sensors also allow for the entire device to become a sort of a control. What this means is that comfortable one-hand operation may just become a reality since you can hold the device in one hand and your fingers can generate button zones right on the gadget’s body!

It is quite an idea! I mean, the first time you look at it you think: Star Wars! (Or maybe that’s just me being a fanboy.)

But in any case, it will be very interesting to actually see this in action. If it ever gets announced by Jobs, it will undoubtedly change the way we interact with our gadgets. [The Readers Eye, SlashGear via USPTO]