The iPhone Dev-Team has finally shown off a video demo of iOS 4.1 jailbreak on the newly released iPod touch 4G by loading SHAtter exploit in PwnageTool (video after the break). This test version of PwnageTool however is currently for internal testing only. But it will be released later for iPhone 4 users so that they can preserve their old baseband in future for carrier unlock by restoring to the custom firmware file. 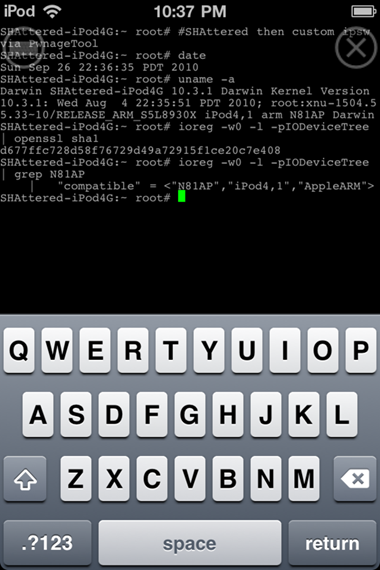 The iPhone Dev-Team has also confirmed that new and faster tools (probably named as GreenPois0n) are already being developed which will jailbreak all iOS based devices using this new low-level bootrom exploit named SHAtter. This exploit was discovered by pod2g, a former member of the Chronic Dev-Team. Since it is a low-level bootrom exploit, Apple will not be able to patch this with a new firmware. They will have to introduce a revised hardware for all the current iOS devices to close the loophole. What this means is that once this jailbreak is out, all current iOS based devices will be pwned for life!

There is currently no ETA for this new jailbreak tool. It will be released once it is ready. We will of course let you know as soon as it is available for public consumption. Stay tuned for that! [via iPhone Dev-Team Blog]