Apple has been granted a patent that could point to the company adding Touch ID to phones that don’t have Home buttons. The fingerprint sensor would likely be placed beneath the display, just as some Android phone makers already do.

The patent relates to a way for fingerprints to be read optically, rather than capacitively as is the case with existing Touch ID systems. The current MacBook Pro and MacBook Air notebooks use capacitive readers like iPhones, but the recently released 16-inch MacBook Pro uses an optical reader. Just like the one that could be used in an iPhone’s display.

In fact, the illustrations that Apple provided for the patent application show exactly that. And it even outlines it in the related text, too.

As will be appreciated by those skilled in the art, if the display is in the form of a touch display, the touch display may operate as both an input device and a display. As such, the display would cooperate with the controller to perform one or more device functions in response to input. For example, a device function may include a powering on or off of the electronic device, initiating communication via the wireless transceiver, and/or performing a menu function based upon input to the touch display.

The controller may change the display to show a menu of available applications based upon pressing or input to the touch display. Of course, other device functions may be performed based upon input to the touch display. Other or additional finger-operated user input devices may be carried by the portable housing, for example, a pushbutton switch, which may alternatively or additionally be used for device functions as will be appreciated by those skilled in the art. 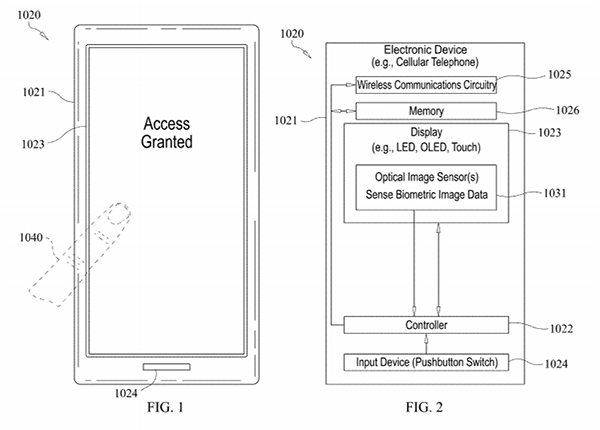 While it’s possible that Apple could replace Face ID with a new Touch ID implementation, it’s more likely that both will be used in the future. The two methods have their differences as well as their own positives and negatives, so the use of both would cover all bases. What that would do to the potential cost of future iPhones is unclear at this point, however.