2021 iPhone Won’t Have Any Port, iPhone SE 2 Plus To Have Touch ID In Power Button

Analyst Ming-Chi Kuo has shared some very interesting information about the iPhones that he expects Apple to announce in 2021.

According to a research note picked up by MacRumors, we can expect one of the iPhones to be a new high-end model that is completely wireless.

That means that the phone won’t have a Lightning port, leaving wireless charging as the only way to power it.

That’s in the second half of 2021, presumably in the usual September release window. But earlier in that year, Kuo also expects Apple to announce the iPhone SE 2 Plus, although it’s not known yet whether that’s the name Apple will go with.

According to Kuo, that phone will not feature Face ID, with Touch ID embedded in the device’s power button.

Apple will launch the iPhone SE2 Plus in 1H21. We predict that the display size will be 5.5 or 6.1-inch. This model will adopt a full-screen design. The notch area will be smaller because of no Face ID support. The Touch ID will be integrated with the power button, which is located on the side. 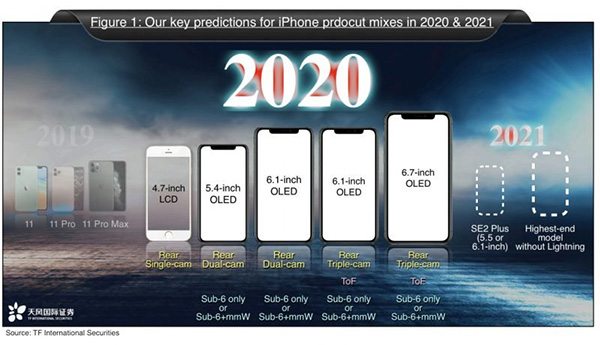 Both of those two iPhone claims makes for some interesting reading. Kuo has a pretty good record with these things, but both of these claims appear out of left field at first glance. Maybe we should just get 2020 out of the way first.