After five years leading Apple’s retail initiatives, it has been confirmed that Angela Ahrendts will be stepping down this coming April. Upon her departure, Deirdre O’Brien will be stepping into the role of Senior Vice President of Retail + People. 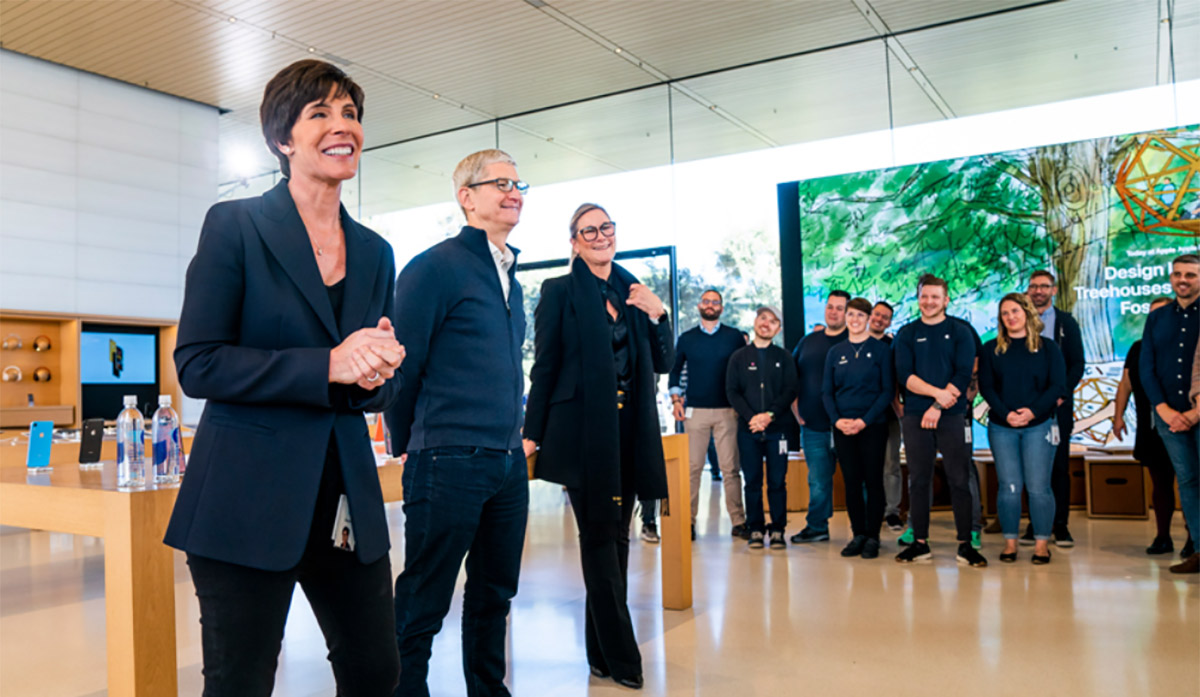 The former Burberry executive wasted no time at all in revamping the company’s Retail stores and turning them into a beautiful shopping experience that captured a wide array of emotions for those in attendance. Ahrendts was also responsible for pioneering the Today at Apple initiative which brings free educational and creative sessions to consumers directly within local Retail stores.

It’s actually quite staggering when you consider her contribution to Apple’s Retail initiatives and even more staggering when you consider that these invaluable sessions are held free-of-charge in Apple Retail stores across the globe. As part of the departure, Angela Ahrendts will look for “new personal and professional pursuits,” which will presumably be outside of Apple altogether as she looks to take the next step in her glittering and impressive career to date.

When she makes that move, existing executive Deirdre O’Brien will step up her responsibilities after being promoted to Vice President of People within the organization two years ago.

Apple’s CEO, Tim Cook, describes Apple’s people as the “soul” of the company, which goes to show just how much important O’Brien’s new role will be:

At Apple, we believe our soul is our people, and Deirdre understands the qualities and strengths of our team better than anyone. For more than three decades, she has helped keep Apple focused on serving customers and enriching lives. She’s an exceptional leader and she’s been a vital partner to our retail teams around the world since the very beginning. I am thrilled to work alongside Deirdre in her new role, and I know our 70,000 retail employees will be, too.

Apple’s CEO, Tim Cook sent out a memo to all employees:

I’m writing to let you know about an important leadership change. Today we’re announcing the promotion of one of Apple’s most passionate and experienced advocates for our customers and employees — and the departure of a much-loved and accomplished leader who has played a transformative role in shaping Apple’s retail experiences.

After five years leading Apple’s retail and online stores, Angela Ahrendts is planning to leave Apple in April for new personal and professional pursuits. Angela has inspired and energized our retail teams with the vision of stores as a place where the best of Apple comes together to serve customers and communities. During her tenure, the in-store experience has been redefined with programs like Today at Apple, and our relationship with customers is stronger than ever.

This transition gives us an opportunity to reinforce and carry forward the values that make our retail and online stores the best in the world — and our mission to enrich the lives of others. As I’ve said many times, Apple’s greatest asset is its people. And with that in mind, the best choice to lead our team became clear very quickly.

I am thrilled to announce that Deirdre O’Brien will be taking responsibility for our retail teams in a new role as senior vice president of Retail + People. Deirdre brings insight and experience gained over 30 years at Apple — decades spent focusing on the connection between customers and the people and processes that serve them. Working collaboratively across Apple, Deirdre and her teams empower people to lead with purpose and humanity.

Deirdre was part of the team that planned and launched Apple’s very first online and retail stores. She has been a part of Retail’s exciting expansion and every product launch since. She knows the value of the deep human connections that retail experiences make possible — and she knows this is where Apple shows its heart and soul.

In her capacity as vice president of People, Deirdre and her team have brought elevated focus to how Apple inspires, connects, develops and cares for its employees — essential efforts that she will continue companywide through the People team in her new and expanded role.

As we look forward, finding new ways to elevate our in-store and online experiences, forging deeper relationships with the customers who love our products, I believe that our team, at every level, is the best in the business. I am grateful to Angela for all she’s done for Apple, and I’m looking forward to what Deirdre will bring to her new role.

To everyone in Retail, and our employees worldwide, thanks for all you do to help dreamers become doers, to expand human potential and to do the best work of our lives.

As Ahrendts moves out of the Apple ecosystem in pursuit of her next challenge, it’s not so much as in with the new but putting faith and trust in the old with O’Brien having a long and impressive career with Apple.