With the boom of the tablet and smartphone markets, allied to the various online app stores / marketplaces, many now choose to create, edit, read, export, send and receive their documents and such while on-the-fly. 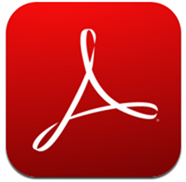 There’s not exactly a shortage of apps to choose from, either, and even Apple’s own iWork suite has been ported to the iPhone, presenting users with the ability to create keynote speeches, spreadsheets and word-based documents at their fingertips.

Adobe hasn’t always had the best of relationships with the Cupertino company, which could go some length to explain the fact that Adobe Reader, the popular .pdf viewing software, has only just made its way to iOS. With so many .pdf editors and readers already gracing the App Store, it’s not as though consumers were crying out for it; but nonetheless, it’s good to see the Mountain View-based company has finally given users an official app. 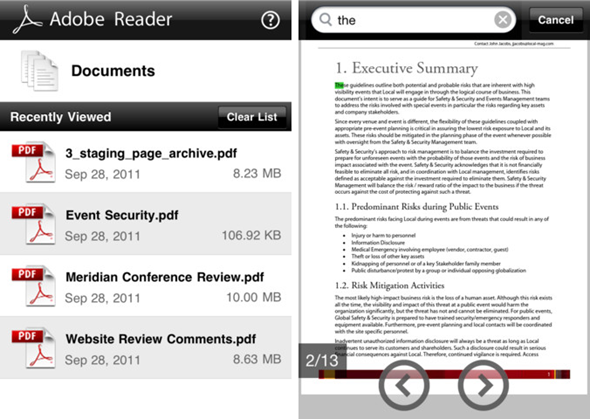 A couple of months ago, Adobe set up for the official Reader release by putting out an iOS app entitled CreatePDF, allowing iPhone and iPad users to convert a range of documents into PDF files whilst preserving quality and accessibility standards within the document. This new release gives iOS users the double arsenal of tools needed to create and read documents in a proper manner.

Adobe has come under fire in the past for harboring what many concerned with Apple would see as aging, declining technology – namely Flash; which presently accounts for a large chunk of the rich content present on the Web. This was never more apparent than when the now-deceased Steve Jobs wrote an infamous essay in which he laid into Flash whilst advocating HTML 5.

The new app, according to Adobe, works with numerous types of PDF files such as PDF Portfolios, password-protected PDF documents and Adobe LiveCycle rights-managed PDF files.

Having tested Adobe Reader on the iPhone 4S and iPhone 4, we have to say that it runs smoothly and as advertised. Highlights of the app include the numerous tap zones, which lets you jump back and forth between documents by tapping on the left and right edges in Single Page mode.

The App, like its desktop counterpart, is absolutely free, and ready to be unleashed on iOS 5.