Rumors leading up to the announcement of the iPhone 4S had us looking forward to all kinds of weird and wonderful hardware. A brand new, tear-drop-shaped chassis was mooted at one point, along with a larger screen. While all the rumors were flying around though, there was one constant, one feature that we could all pretty much agree on. 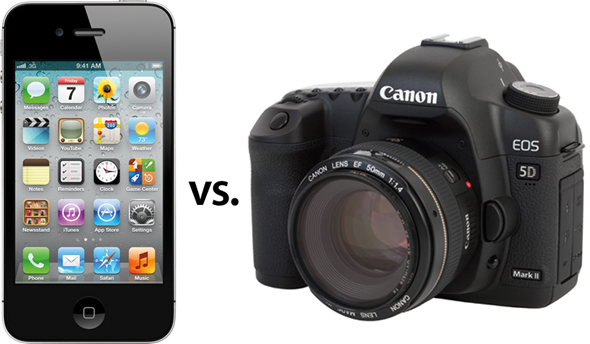 That feature was an 8 megapixel camera, a nice bump from the iPhone 4’s 5 megapixel shooter.

As you might expect, Apple has pushed the boat out in terms of marketing the increased photo-taking prowess afforded by the increase in pixels since last year’s model.

While that’s undoubtedly awesome, what about the increase in quality when recording a video, using that new 1080p-ready lens?

Apple has again touted their new image stabilization software which, they claim, will do away with all those shaky-cam videos we see around the web, and in the process, hopefully making it easier for people to get proper spy video of new iDevices!

So, just how good is the video that this little lens kicks out, compared to, say, a high-end DSLR? I’m glad you asked, as one crazy guy has rigged up an elaborate test against the Canon EOS 5D MKII in order to answer just that question, and the results are pretty spectacular.

Robino Films has put together a little video using the aforementioned camera and an iPhone 4S, and after chopping the two together, uploaded it to everyone’s favorite destination for high definition video – Vimeo.

I’ll let him explain how he did it.

Exposure, shutter speed, frame rate and picture style were matched as close as possible between the two cameras.

This test shows that the tiny F2.4 lens and sensor on the iPhone are pretty nice. It even got a little depth of field!

What the tests show is that the iPhone 4S isn’t a bad little video camera, and considering you’ll always have it with you, it has to be regarded as one of the most useful. With the iPhone 4 already the most used camera on Flickr for photos, could we see the iPhone 4S do the same thing but with video?

If results like this are anything to go by, there’s a very real chance that could happen!