Remember the times when people used to meet new people at a bar and exchange phone numbers of email addresses? Well, if the release of AddFriend for iOS is anything to go by, that exchange of numbers/email is being replaced by adding each other over on the world’s biggest social network Facebook. Check it out after the jump. 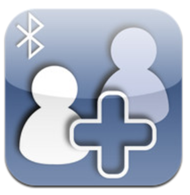 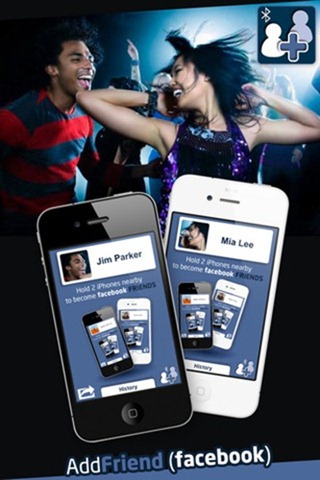 AddFriend is a port of the original Android app that made use of NFC with the same basic functionality: being able to quickly add new people on Facebook by keeping your devices in close proximity.

You make a new friend, at a party, a diner, a bar, a conference …
Add him/her to Facebook via mobile … instantaneously … even offline

We’ve tested the app on an iPhone 4S and can confirm that it works as advertised.

AddFriends is very easy to set up: you login to your Facebook account, authorize the app to post to profile, find a person who has AddFriends on their device and, once you’re close enough that the devices discover each other on Bluetooth, you can tap their name and instantaneously become friends in the online-world. If you’re already added, a post is published on your news feed saying that the two of you “high-fived” each other in physical life with AddFriend for iPhone. Lastly, you can still use the app if you don’t have internet connectivity. You can later access offline-events from History. 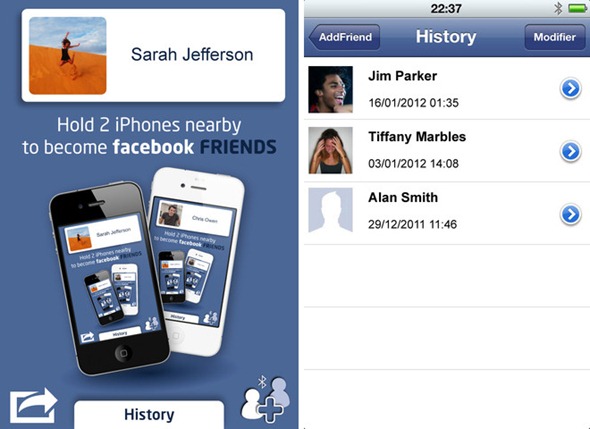 We mentioned two limitations/pre-requisites that AddFriend had in its Android version: firstly, you had to have Facebook’s native app installed and secondly, have a NFC-enabled smartphone (which is still a rarity). The first pre-requisite is still there on the iOS version, but the second one, thankfully, isn’t. AddFriend for iOS uses Bluetooth instead of NFC, which is the reason why the app works a variety of iOS devices: iPhone 3GS/4/4S, iPod touch 4G and iPad 2 on iOS 4.0 and up.

I don’t know about you, but I’m not the sort that adds everyone they meet in real-life and so, I won’t be using this.