Android’s amazing flexibility lets enthusiasts replace just about every facet of their device’s software. You can flash a completely different version of Android (custom ROMs) for a completely new experience, or fine-tune things by installing your own launcher, keyboard, dialer, contacts etc. to ensure that your device looks absolutely unique and works the way you want it to work.

While most people get by with stock apps, enthusiasts prefer third-party solutions because these offer more features over the pre-included app. The messaging app on Android is one of the most lackluster parts of the OS and, thankfully, there are plenty of excellent free and paid alternatives available in the Android Market such as GO SMS and Handcent. Today, we will be covering a completely new messaging app called Powow that aims to take texting to a whole new level on Android devices. Check it out after the jump. 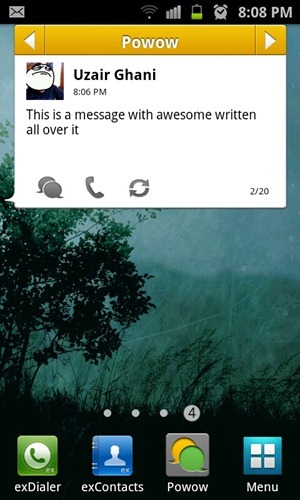 Powow: Text Messaging takes texting to a level never seen on an Android device! Want instant home screen access to your texts? How about a quick scroll through your recent messages from only your favorite contacts? Tired of someone endlessly texting and want to ignore them completely? Do it ALL (and more) with Powow: Text Messaging!

We’ve tested app on a Samsung Galaxy S II on Android 2.3 and confirm that the app works as advertised. While largely the same as other messaging apps, Powow does come with a few unique (or uniquely-implemented) features that separate it from established giants like GO SMS Pro and Handcent.

Its ZipIt feature allows users to mute or blacklist people in their contacts list so that they don’t receive notifications for texts or don’t see their messages at all (respectively). People who have been “zipped” can be seen under the “Zipped” category. On the opposite end of the spectrum, you can set certain contacts as “favorites” so that you can scroll through messages from the “Favorites” category without seeing messages from people who you don’t care all that much about. 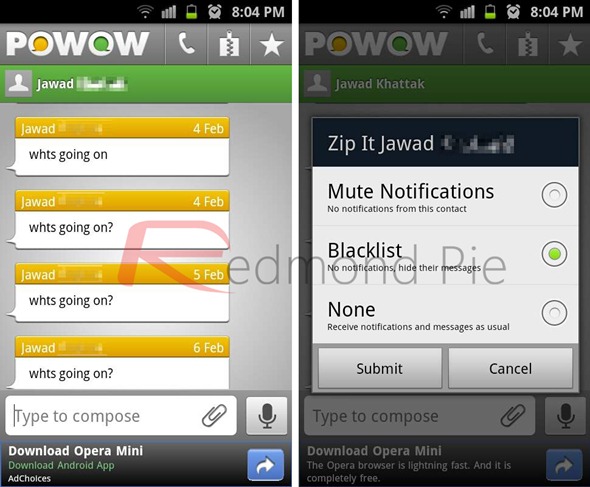 Another uniquely-implemented feature Powow comes with is the speech-to-text button which is included in every text-editing window. Other apps do not have a dedicated button for this.

Other than that, it comes with features like a dedicated widget on your homescreen for quick-access to texts, fast pop-up notifications and emoticons etc. 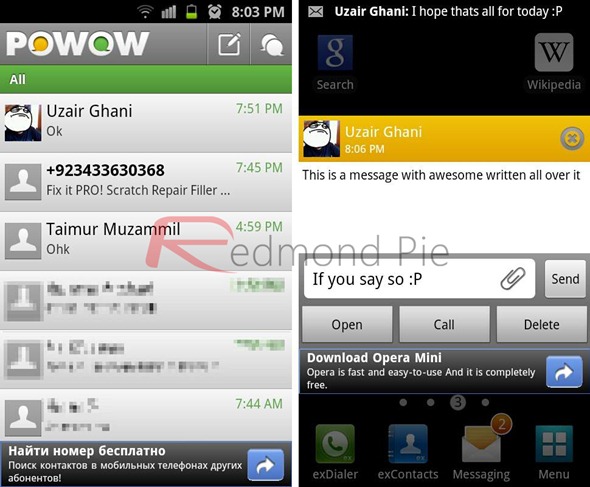 So, all in all, Powow is a pretty cool alternative messaging app. It lets you manage texts like a pro and looks good while it’s at it. The only things we didn’t like about the app were the obnoxious ads which, unfortunately, cannot be removed since there is only one version of the app: free and ad-supported. The developer should give users the option to turn off ads if they get a paid version of the app.

Why should anyone prefer using Powow over GO SMS or Handcent? Well, if you like filtering contacts and the texts they send you, you should definitely check it out.