The recent update of Absinthe has left many prospective jailbreakers drunk with excitement, and given it even provided iPad 3 users with their first taste of jailbreak freedom – untethered no less – the joyous reaction is most certainly justified.

Thanks to the collaborative work of the GreenPois0n team, Pod2g, and the rest of the usual suspects, the tool offers users of most current devices an untethered jailbreak on the latest firmware version – iOS 5.1.1. Courtesy of an update, which drags the version number up to 2.0.2, those rocking an iPhone 4 GSM with the iOS 5.1.1 build 9B208 can also jailbreak their devices using Absinthe.

Absinthe, which first made its name in January for being the very first to jailbreak the iPhone 4S untethered, is certainly one of the most reliable jailbreak tools to date. I have personally used most of the jailbreak since 2009 onwards, and although alternatives have done a fantastic job, I would pit Absinthe as the smoothest jailbreak hitherto. Having used the 5.0.1 version on an iPad 2 and the 5.1.1 iteration an iPhone 4S, I have yet to experience any crashes or adverse effects – despite being rather trigger happy with the tweaks available.

With i0n1c teasing the iPad 3 jailbreak from the release date, the pressure on the various dev teams to find the leaks was a tad more elevated than usual. While there’s no actual onus on the likes of pod2g to release a jailbreak tool (it is a privilege to us, after all – not a right), the fact that someone else was way ahead of the game would certainly have added an incentive.

As we’ve already stated, make sure you back up your iOS 5.1.1 blobs – the importance of which cannot be emphasized enough. The great thing about doing so is that if you ever update by accident, or update and realize the new firmware version is strewn with bugs, you can easily downgrade to the fully-jailbroken, reliable release that is iOS 5.1.1.

With the sermon complete, those wielding an iPhone 4 GSM with iOS 5.1.1 9B208 can now belatedly join the jailbreak party, courtesy of Absinthe 2.0.2, which is linked to below. 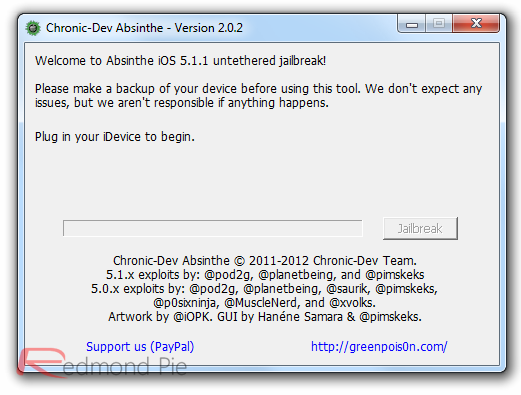