While rumors of new iPad releases are nothing new, the discovery of new Eurasian Economic Commission registrations for a number of unannounced Apple tablets could be our best hint yet that new iPads are not too far away.

Filings such as this, which were first spotted by French website Consomac, are legal requirements for all devices with encryption that are sold in Armenia, Belarus, Kazakhstan and Russia.

Two of the model numbers that have been filed, A1893 and A1954, do not correspond to any current iPad, whether that be the iPad mini, iPad Pro or standard iPad. Furthermore, there are a number of “sample” tablet and smartphone devices listed that have model numbers which begin with AA or CC, something that may or may not mean we could see new devices altogether.

Recent rumors have suggested that a refresh of the least costly 9.7-inch iPad could be announced soon, sitting at a price point of $329 similar to the device that was previously introduced in March of last year. The iPad mini 4 in particular is very much in need of a refresh, although there has been talk of Apple letting that device languish as the 9.7-inch iPad continues to shrink thanks to smaller bezels. The potential removal of the Home button, thanks to the likely introduction of Face ID, may also make the need for a smaller iPad redundant. It’s unlikely something like Face ID would find its way into a $329 iPad, however. 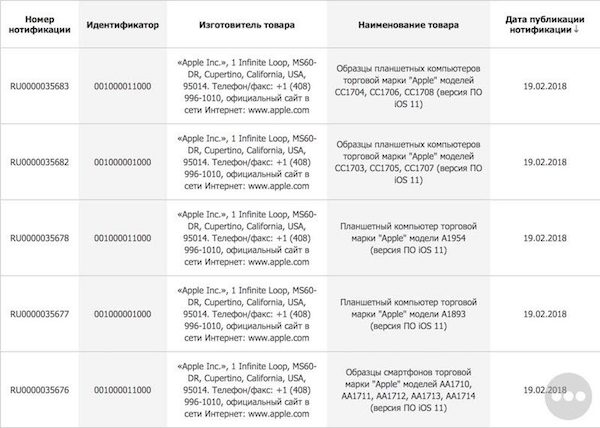 The iPad mini is not the only Apple device overdue a refresh – the iPhone SE is another device that has been the subject of rumors surrounding a potentially impending update. It may be possible that this is one of the “sample” devices filed with the EEC, although that is something impossible to know for sure as of right now.