Amazon is currently offering a massive $100 discount on Apple’s latest model iPad. The discount means that consumers can pick up a 128GB WiFi mobile iPad finished in Silver for just $329 rather than the original $429 price-tag.

Apple had somewhat of a dip with iPad not that long ago, which was likely partly due to the fact that consumers were happy with the hardware that they had and didn’t see the need to upgrade and spend $400+ every twelve months on a new tablet which essentially functioned exactly the same as the one they already have. With that said, Apple has been making real progress with the iPad recently and has found a sweet spot with its models that seems to have resonated with consumers which in turn has boosted sales.

This iPad model comes with Apple’s gorgeous 9.7-inch Retina display which has been designed to bring content to life and to make everything “pop” from a visual perspective. It also comes with added support for Apple Pencil, which, until this model, had been strictly limited to Apple’s Pro iPad variants. Now, you get Apple Pencil support without having to spend every penny that you have in your possession. It even supports adding a brand new keyboard to it, which gives you standard input as well as input via an attached keyboard and Apple Pencil.

Under-the-hood, it offers Apple’s A10 Fusion Chip with Touch ID built directly into the physical Home button on the device. This doesn’t come with Apple’s Face ID but at least it still has biometric identification in the name of advanced security. The rear of the device is blessed with an 8-megapixel camera and the front has a 1.2-megapixel shooter for selfies and video calling. It should offer up to 10-hours of battery life on a single charge and comes with 802.11ac WiFi. 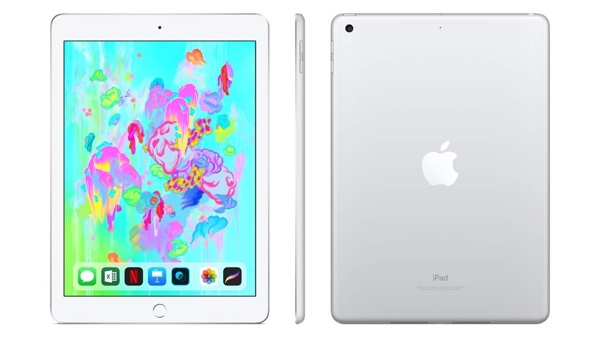 And, of course, it offers iOS installed by default, which will get free access to iPadOS 13 later this year when it drops and gives immediate access to the App Store and all of the apps, games, and downloads that can be found there. Grab this wonderful deal right now!