Apple is pushing movie studios to allow home rentals on iTunes of the new movies running in the cinemas, according to a new report.

Apple already offers movie sales and rentals via its iTunes platform, but those rentals are only available months after a movie’s theatrical release. This move would see the same content available to people, in their own homes, much sooner. As you may imagine though, a premium would likely be charged for such an offering.

According to Bloomberg, a number of studios are already considering the move, though there are several concerns that would need to be ironed out before any deal could be struck.

The main concern for movie studios, as ever, is piracy. While iTunes would encrypt movies in the same way it does now, providing at least some protection against movies being pirated, studios are concerned that something as simple as a camera pointed at a computer screen could be the easiest and quickest way for pirates to get newly-released movies onto the internet. If such a thing were to happen to a big, blockbuster movie during its initial theatrical release, cinemas and associated businesses would be impacted.

21st Century Fox Inc., Time Warner Inc.’s Warner Bros. and Comcast Corp.’s Universal Pictures all confirmed over the past week that they are looking to offer high-priced, home-video rentals of new movies shortly after they open in theaters.

If such a movie rental system were to become a reality, movie lovers could expect to pay anything up to $30 in order to watch a new release at home. On the face of it, that may seem costly, but when you remember that multiple people can watch that rental, it’s important to compare that $30 with the price of multiple cinema tickets and not just one. With that in mind, that asking price suddenly seems much more reasonable. 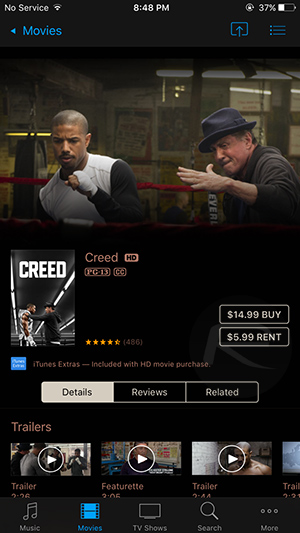 Apple has a history of trying to get deals off the ground and failing of late. Whether this will be the same, only time will tell. We sure hope Apple can make headway here, though. Anything to avoid buying stale popcorn!