Niantic is in the process of rolling out download of Pokemon Go 1.19.1 for iOS and 0.49.1 for Android with the aim of not only progressing the platform, but also introducing new and improved functionality that will hopefully keep Trainers interested in what the title has to offer.

The latest update, which takes Pokemon Go to version 0.49.1 for Android devices, and version 1.19.1 for iPhone, brings a slew of improvements that includes functional enhancements as well as user-interface improvements. Here are full details on what’s new in this update.

First and foremost, the development team at Niantic have made some performance and usability improvements around how duplicate Pokemon are transferred to Professor Willow in exchange for those precious Candies.

Rather than having to scroll through a seemingly endless list of caught critters, transferring one a time in exchange for single Candy, Trainers are now able to press and hold on a Pokemon to invoke the transfer process, and are also now able to transfer multiple creatures at a time to make the whole process a lot more efficient. This will definitely be of great help to those gamers who prefer the method of capturing a heap of low-level Pokemon before transferring out for Candy.

Niantic has also made a number of changes around the recently released Buddy feature that allows a Trainer to pick a specific Pokemon to be assigned as a travel Buddy. This feature initially allowed Candies to be earned by a Buddy Pokemon based on the amount of distance travelled with the app open. The user-interface has now been amended to include the total number of Candy accrued by that particular Buddy Pokemon. This information can be instantly found and interacted with via the Buddy information screen.

The total amount of kilometres walked has also been added to the information screen of each Pokemon that has been added as a Buddy.

In addition to the above, Niantic has taken the opportunity to integrate a number of minor text improvements and overall enhancements as well that should hopefully improve the overall Pokemon Go experience from a usability perspective. Not exactly earth-shattering functionality, but it’s still great to see the platform progress and receiving semi-regular updates.

Full official changelog of the new update is as follows: 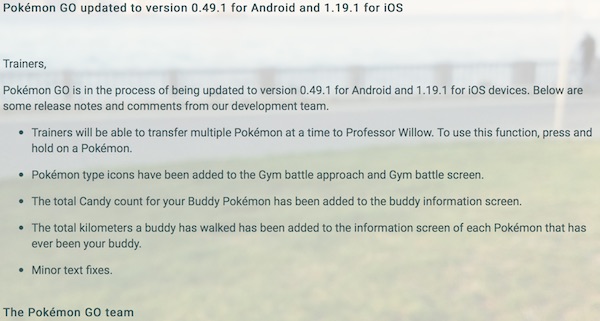 As always, the latest updates are in the process of rolling out via Apple’s App Store and Google’s Play Store. While the update is already live in some regions, it’s not live worldwide as yet. You may have to keep checking the app store of your respective platform to see if it’s available in your region.