The highly respectable blogger Eldar Murtazin of Mobile-review.com in a twitter conversation has revealed that he got his hands on one of the earlier production builds of Windows Mobile 7. According to him, the OS has been built from scratch, the UI is simpler than Zune HD and that none of the existing Windows Mobile apps worked on it. It has got these horizontal navigational movements which seems to have been heavily inspired from Android 3.1/3.2 (?) and iPhone OS.

Important bits from the full version of conversation. posted at WMPoweruser is extracted below for your convenience. 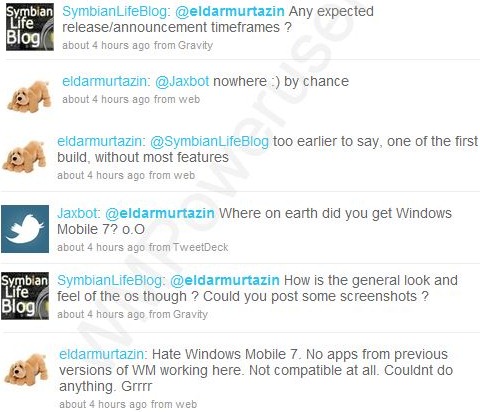 Eldar also pointed out that the OS is far from complete but Microsoft might show it off to their partners behind closed doors at Mobile World Congress (MWC 2010), which is scheduled to be held next month.

If this rumor regarding the legacy apps not being compatible with WinMo 7 turns out be true, it will be interesting to see what strategy Microsoft adopts. Will they dump Windows Mobile 6.5.x entirely? , or will they choose to have both OS’s until WinMo 7 catches up with developers love for apps and all.

With all these latest rumors surrounding Windows Mobile 7, February sure cant get here soon enough.