When the iPhone first launched back in 2007, it came with a number of default apps that were bundled with the software we now know as iOS. Native Messages, Mail, Stocks and Calculator apps have all stood the test of time as Apple continue to iterate through firmware versions with each new device, but one of the more popular but less frequently discussed is the fantastic and visually appealing Weather app. If you are one of the many jailbroken iPhone or iPod touch owners running iOS 6.0 or above, you will be happy to know that the popular WeatherIcon tweak is now compatible with the latest firmware version.

The native Weather app has proven popular not only because it offers quick access to current and future forecasts, but also because it has been periodically updated to offer an extremely appealing user interface. For a lot of people, jailbreaking an iOS device is about making things easier and improving on various aspects. Rather than actually having to go into the app, WeatherIcon 6 lets users quickly glance at the icon to see the current conditions. 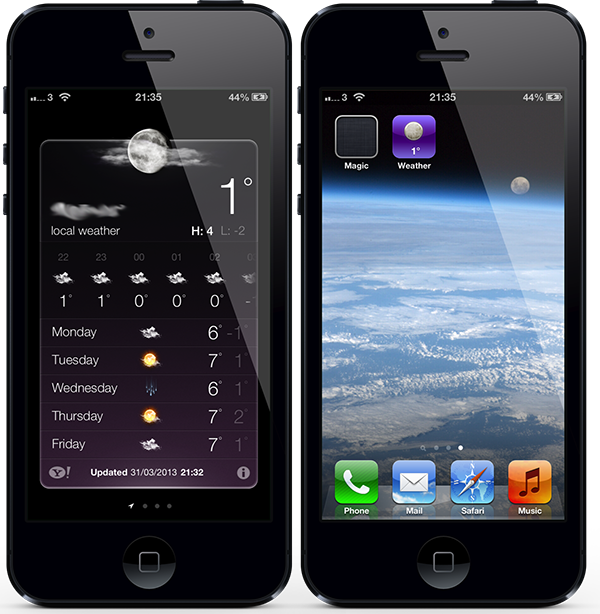 Users have previously had the pleasure of tinkering with the WeatherIcon package and getting all of the real-time weather goodness that it provides, but this is the first time that the package has officially supported those users on iOS 6. As well as being able to immediately glance at the Weather icon to see the current conditions represented in the form of the temperature and a relevant icon, the package will also allow users to view the weather conditions from the Status Bar as soon as an update to the libstatusbar package goes live in Cydia.

There may be a few concerns about the detrimental effect that running a tweak like this has on the battery levels of the phone considering the constant updating of the icon, but for those who make regular use of the Weather app it is generally thought of as a must have.

WeatherIcon 6 is available as a free-of-charge download from the ModMyi repository and comes with full support for jailbroken iPhone and iPod touches running iOS 6.0 and above.