The next big event this week is coming our way courtesy of Microsoft, and it is being held in New York City tomorrow. Not wanting to be outdone and to make sure that they generate the maximum amount of interest possible, the Microsoft Newsroom has confirmed that the event will be streamed live to viewers around the world.

The live Webcast will begin at 11:15am EDT / 8:15am PT (click here to see what time it will be in your region) tomorrow morning and will give potential consumers and technology fans in general a chance to see Microsoft executives and partners go over the major parts of the new Windows 8 operating system. The Redmond based software giant has choosen to hold and broadcast the launch event live in the hopes that it will propel excitement for the software through the roof. 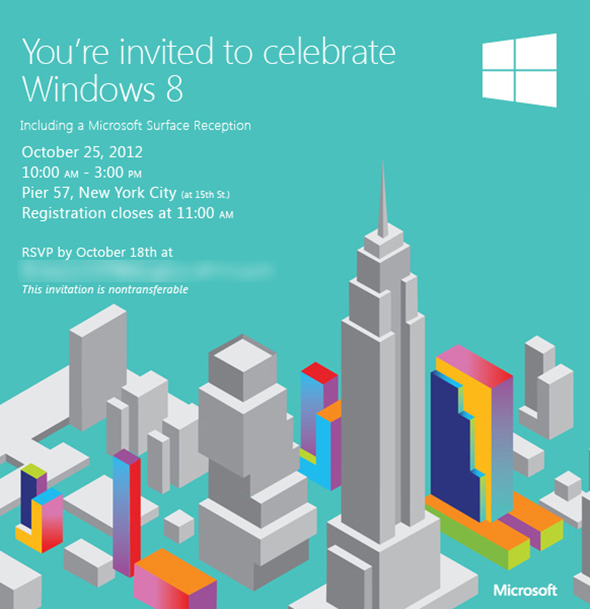 In addition to the launch of Windows 8, Microsoft will also reserve sections of the event that will be dedicated to the Surface tablet that has proved so successful early on (at least in terms of early pre-order sales). With the launch of Windows 8, Microsoft is attempting to usher in a new era of personal computers that they are banking on being sleek and lightweight and that feel equally as comfortable to use through a touchscreen display, or with a more familiar mouse and keyboard.

In addition to the Windows 8 launch webcast, Microsoft is also holding a separate virtual Surface tablet focused webcast at 1:30pm EDT. The secondary broadcast is dedicated to showcasing the Surface hardware, demonstrating its main features and functionality as well as covering all of the different purchase options that will be available to consumers when the release date finally lands on Friday.

We may already know what Microsoft has in store for us with this launch, and unlike an Apple event, it isn’t shrouded in mystery but that shouldn’t detract from what will be a couple of great and informative webcasts that introduce some fantastic hardware and software.

We will update the post as soon as the official live streaming link is live. Stay tuned for that!

Update: Video for the live stream is embedded below: