“So hey! Since I work with some of the best movie cameras in the industry, let me see how my own iPhone 6 compares to those.” says no cameraman ever – well, CNN’s Harvey Hogan just did that, with the news outlet endorsing his entire take on the matter.

Harvey Hogan, the experienced veteran cameraman has worked with CNN for over 14 years and happens to own an iPhone 6 as well, so maybe he was curious, which is fine, until CNN decided to actually include it in one of their shows to showcase the comparison of iPhone 6 versus what could be a Sony HDVS camera. Really. 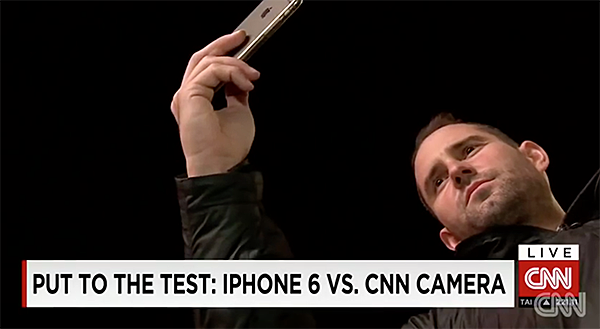 The iPhone lineup has been widely used for amateur video projects for quite some time now, and while the device really holds its own against the toughest of competitions, and has been compared to quite a few handful of professional cameras, this is the first time an iPhone 6 is being compared to a professional studio movie camera and we really don’t understand why.

The comparison was drawn and Harvey must’ve felt the urge to high-five his professional grade movie camera as the iPhone 6 was bullied to results that paled in comparison to the pro camera. Yes Harvey, we are in shock right now because CNN have simply busted your bubble.

The unrealistic and non-standardized tests yielded no surprise, and rightly so, and as pointless as this comparison was, we do however get a few useful – not kidding – tips on making quick little movies, regardless of whichever or whatever type of camera you’re shooting from – be it a smartphone.

However, Harvey goes off to spoil it again for himself as he takes us to his computer where he ‘finely’ analyzes the picture quality from both the devices and talks about how fine and sharp the results from his professional grade movie camera are, compared to the iPhone 6’s. “It’s like comparing a Mini to a Maserati” says Harvey. Maybe CNN should have thought of that before?

The iPhone 6’s camera unit is one of the best on any smartphone out there today, so users will have to stay content with that and Apple should come out with a statement over this, because clearly they have been outdone by a mere news camera, right?

However, in all seriousness, Apple may have enjoyed this clip from CNN as it keeps the brand and device circulating in the media.