Apple has just pushed the fourth beta of iOS 8.3, and although most of its features have already been outlined through earlier betas, the Cupertino company has made a couple of notable tweaks this time around. A new hands-on walkthrough offers a good look at what’s new, and gives more than a glimpse of what iPhone, iPad and iPod touch users can expect when the new software is pushed to the end user at some point soon.

The iOS release cycle has really been cranked up these past few months. Whereas Apple used to drop an initial version of its mobile software in the fall followed by a “.1.1″ update shortly after the new year, we’re already at iOS 8.3, with a subsequent iOS 8.4 expected to land before iOS 9 eventually drops. Given the introduction of Apple Pay, CarPlay, Apple Watch and so forth, it makes reasonable sense for more frequent, substantial updates to occur, and where iOS 8.2 brought a number of features relating to the forthcoming wearable, iOS 8.3 is a mixed bag of enhancements. 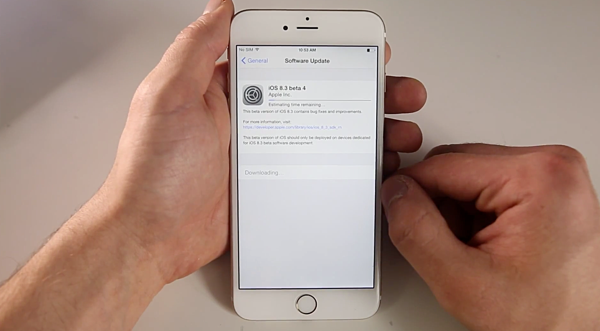 The Chinese market, for example, will be able to reap the benefits of Apple Pay, with China UnionPay supporting the new contactless service. Meanwhile, the emoji system is also in line for an overhaul, with users able to modify skin tones on the ‘people’ emoji characters. Google account logins will be able to capitalize on the added security of two-factor authentication, while iCloud Photo Library will finally crawl out of beta.

Elsewhere, CarPlay, which was first officially supported a year ago with iOS 7.1, will be going wireless, which is much more in-keeping with the Apple way of doing things. Hitherto, anybody using CarPlay has needed a Lightning dock connector, but once iOS 8.3 hits GM, the cable will only be required for charging.

YouTuber EverythingApplePro has offered an in-depth progress report of iOS 8.3 with a thorough walkthrough of the newly-seeded fourth beta, and if you’re interested to see what’s new, then the clip is embedded below.

Oh, and if you’d like to test pre-release iOS software but don’t have developer access, do check the link below which will show you how to grab this and future betas completely free of charge.