Now that Verizon iPhone 4s have started being delivered all across the United States, it was only a matter of time before the guys over at iFixit took one to pieces. Now they have, they’ve made an interesting discovery. 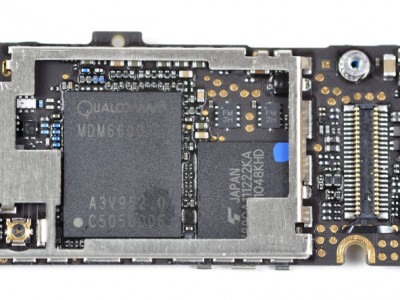 This is the same chipset as the Droid Pro world phone. It supports both GSM and CDMA—which means that Apple could have supported GSM!

Why didn’t they? It may be that it was easier to design antennas for a CDMA-only phone-this phone supports two cellular frequency bands, while Apple supports five bands in the GSM version.

So the CDMA iPhone could actually have been a ‘world phone’. Surely now it’s becoming clear that the iPhone 5 will make the next logical step and be one universal handset meaning it will work on both CDMA and GSM networks?

Of course, it wouldn’t be the first time Apple hasn’t done the obvious thing!

Almost everything else is unchanged. The vibration motor however has been moved and is reported to ‘feel’ different. Not earth-shattering news!

Check out the full lowdown at iFixit for all the juicy details.