UsefulIcons For iOS Adds A Number Of Commonly Used, Useful Shortcuts To Your Device’s Home Screen

Mobile devices like the iPhone and iPad are advanced pieces of kit with a number of powerful features, but one of the main reasons why they are so popular is the pure convenience which they provide in being able to accomplish certain tasks at an accelerated rate. Smartphone users generally tend to install a wide array of apps depending on their personal taste, but certain system settings and toggles are used consistently by most.

With that in mind, developer rud0lf77 has released a tweak into the Cydia store called UsefulIcons. The tweak adds a total of up to twelve dynamic icons onto the device’s home screen, all of which aim to provide the user with quick access to useful system settings and device options. The theory behind such a tweak is that the most commonly used settings and functions in iOS are generally spread out across the OS with some located in the Settings bundle, some being actual app functions and others not really available as default (such as toggling theashlight on or off).

In its current form, the UsefulIcons tweak offers the following SpringBoard enhancements: 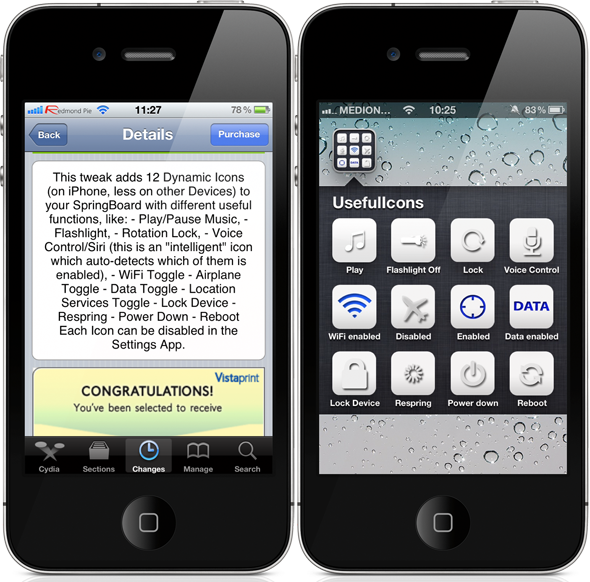 The UsefulIcons tweak also comes with its own preferences bundle within the native Settings app which offers the ability to toggle each dynamic icon on or off for maximum control over the tweak. This particular tweak isn’t ground-breaking and certainly doesn’t do anything that hasn’t already been done in one form or another, but it is a very good example of taking an already-covered ground and re-implementing it to give users a different choice.

UsefulIcons is available to download from the ModMyi repository at a cost of $0.99 and although it doesn’t give it specific iOS version requirements, but to use the Siri based part of this tweak; user will need a device capable of running Siri either natively or through the use of Spire.