Majority of us today have some form of extremely active online life that involves interacting and sharing information with people via multiple social networks. Online outlets like Twitter, Instagram and Facebook allows us to connect with the world around with us in a way that has never been possible before, but sometimes it all feels just a little too virtual. The Top Charms Kickstarter project is a nice and quirky way of bringing a section of our virtual world into reality, by letting backers wear and show off images and photographs that matter to them.

The designer behind the project came up with the idea of Top Charms after attempting to pick out the most tangible features of Facebook, coming to the conclusion that a real-world product representation of the world’s largest social network should be updatable and keep the user close to the things that matter the most to them. The Top Charms idea is not only quirky, but also quite loving as it allows important photographs to be printed out, worn and shown off and then shared online with an accompanying message explaining why. 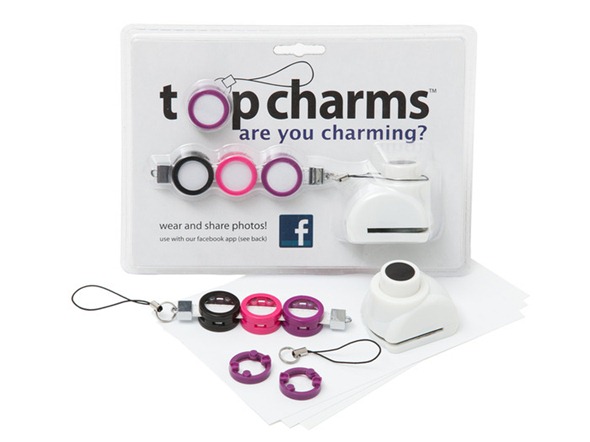 Backers of the project will be giving the green-light for the photo charm kit and accompanying Facebook application to go into production that allows users to run through a relatively hassle-free process in order to have photographs of family and loved ones attached to their clothing or favorite gadgets via a clever changeable magnet based system. Those who choose to pledge the correct amount will be able to resize photographs via the official app, print the picture off and then use the cutting tool to get the perfect sized image to fit in the magnetic charms.

It is worth pointing out that although the creator of the project may have come up with the idea when trying to imagine what a real-world physical Facebook product would look like, it can actually be used without a Facebook account. The official app allows comments to be posted directly to the social network, but is by no means a requirement to get involved in the wonderful world of Top Charms. The funding goal has already been met, but with twenty-five days to go and a limited number of packages available it’s a great opportunity to get them at a reduced rate before they go into mass production.