Apple CEO Tim Cook has been pressing the flesh as part of the big iPhone X release, and with Apple keen to make sure its executive team is on hand for big product releases, it should come as no surprise that Cook popped up at one of the company’s stores to help people make their purchases.

A video is available online via which we can see Cook greeting customers to the Palo Alto Apple Store during Friday’s iPhone X release, and as you might expect, there was plenty of cheering going on around him. 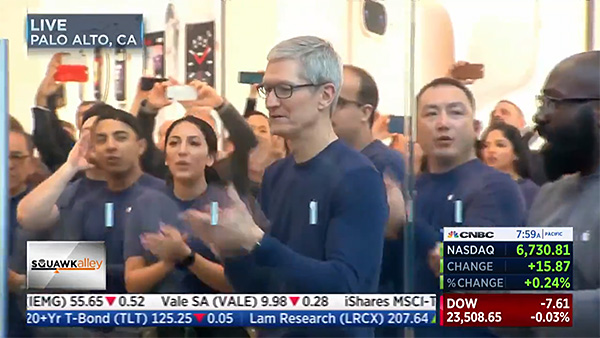 Cook’s appearance in Palo Alto came after Thursday’s quarterly earnings conference call, during which he spoke about the high starting price of an iPhone X – the iPhone X starts at $999 and can raise to $1149 if you plump for the 256GB model. According to Cook, an iPhone X can cost as little as a few coffees per week if bought via a financing scheme. Quite how that makes the price more stomachable, we are not really sure.

I think it’s important to remember that a large number of people pay for the phone by month. I think you would find you could buy an iPhone X for $33/month. So, if you think about that, that’s a few coffees a week — it’s less than a coffee a day at one of these nice coffee places.

Cook also pointed out that many iPhone buyers now trade their existing iPhones in as a way of reducing the cost associated with picking up the latest and greatest iPhone on the market. Some buyers can shave up to $350 off of the price of a new iPhone by trading in an existing device, although we still feel that no matter which way you dice it, the iPhone X is never going to be inexpensive.

If early reviews are to be believed, though, it looks like you may just get what you pay for.

JUST IN: Apple CEO Tim Cook arrives at the company’s Palo Alto, CA store for the release of the iPhone X. pic.twitter.com/kpBoOHws2W