A few months back, Microsoft announced the Surface, an ultra-mobile laptop/tablet hybrid running Windows, taking advantage of Windows 8 and Windows RT’s new touch-screen user-interface. Since then, many have been hoping for a Surface smartphone: while no announcements have been made, several artists have created concepts depicting what they expect a Surface Phone to look like.

This past July, an artist created a few renderings of a Surface Phone, following the announcement of the Surface. Now, another artist has turned the static images into a video depicting what the Surface Phone might look like. Take a look after the jump. 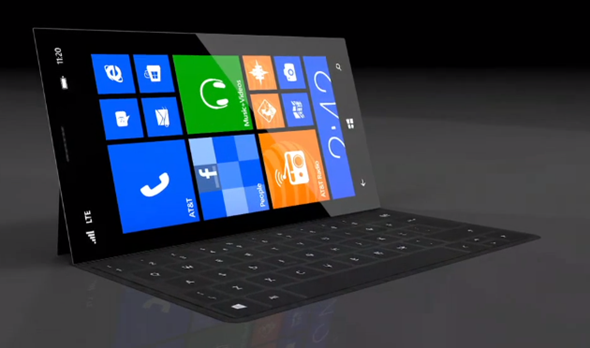 The device, which seems to have a larger and thinner than usual form factor, with a 5-inch 1280×720 Super AMOLED+ screen, seems to be running a Windows Phone 8/Windows 8 hybrid. Much like the concepts unveiled back in July, it sports a full-fledged USB 3.0 port, 12MP camera, and an “ultra-bright” flash, not to mention In additional to traditional features, this concept device sports a kickstand, just like some Android devices, which is incredibly useful for consuming video content, and a mini touch cover that can be used as a physical keyboard (although I doubt the application that this feature may have given the size of the device).

Microsoft has recently released Windows Phone 8, although it doesn’t currently produce its own line of hardware, instead licensing the system out to several hardware manufacturers, much like it does with Windows. However, it is much easier to ensure a smooth user experience if the hardware and software are developed by the same company. Much like how the Surface is manufactured by Microsoft, there is a possibility that phones might follow suit.

As much of the technology press pointed out at the time, the concept is indeed quite beautiful. Especially now in video form, it is increasingly starting to look like a Surface Phone actually has a reasonable business case. While it will likely be a while before Microsoft makes an official announcement, if it ever does. More likely than not, however, the Redmond company is paying close attention to the traction that these fan-made concepts are generating: some positive feedback might just be enough to lead Microsoft to consider a Surface Phone.