Rumors of Apple’ integrating voice recognition in iOS 5 have existed since late last year and today, those rumors have been confirmed to be true as screenshots of iOS 5 Beta 5 have revealed the said feature. 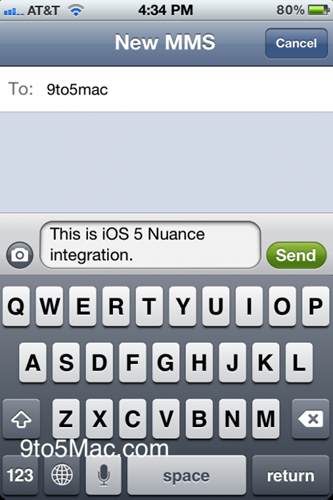 The reveal comes from our friends over at 9to5Mac who received a screenshot from a reliable source. The screenshot shows the Messages.app in which the user is sending a new MMS; the speech-to-text feature is revealed by the little microphone icon which can be seen to the left of the space bar.

The speech-to-text feature works as you would expect. One simply has to tap on the microphone icon and start speaking. Once the user has stopped speaking, the speech will be converted to text using Nuance Communications’ excellent voice recognition technology.

Here are the screenshots: 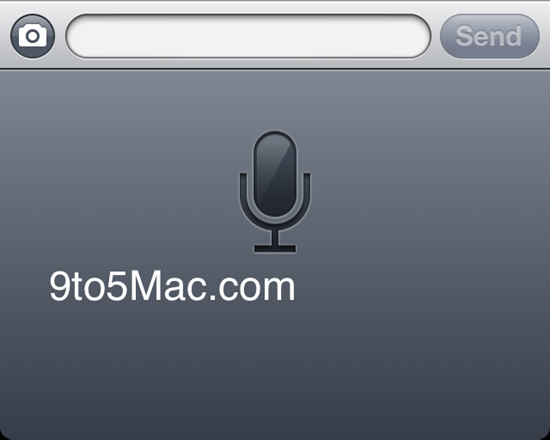 iOS 5′s speech-to-text functionality appears like it will actually be happening, and we have the screenshot to prove it. A reliable source has sent us the above screenshot which details how the iOS 5 speech-to-text functionality will be activated. As you can see, it is quite simple. Just click the microphone icon next to the space key and start talking. Once the key is clicked, a new microphone overlay will appear as long as you are talking. After that, the text will appear in the text field as you can see in the screenshot above.

According to folks who have dug deep down into iOS 5 Beta 5, the feature will simply be called Dictation. Dictation, of course, is Apple’s answer to Google’s Voice Actions for Android which was introduced with Android 2.2 “Froyo”.

This feature has been rumored coming ever since Steve Wozniak let it slip last November that Apple had acquired Nuance. Since then, we’ve seen reports of Apple reportedly announcing the new feature at this year’s WWDC (where iOS 5 was announced) which obviously didn’t happen for unclear reasons.

There is an indirect way to try out the new technology. Nuance Communications’ speech-to-text recognition can be played around with by installing their free Dragon Dictation app for all iOS devices [iTunes Link].

One can definitely expect this to be a part of the final release of iOS 5 which is expected to release sometime this Fall i.e. September/October.