The guys over at App Cubby have been riding on the back of quite a large amount of praise since they released the Launch Center Pro iOS app last year. Although it may not be to everyone’s taste, the handy productivity based app takes what can be boring, tedious and repetitive tasks and manages to cut them down into manageable two-tap chunks. That alone probably makes the app worth the purchase for a lot of users, but things in the Launch Center Pro world have improved of late with the release of version 1.1 of the app.

The power of Launch Center Pro comes from its ability to create a number of varying shortcuts to individual actions that would normally require the user to go through a laborious and often lengthy process. The app becomes even more useful when you take into consideration that all of these favorite tasks could be spread out across multiple third-party applications on the device. Launch Center Pro consolidates those actions into one single place on the device. 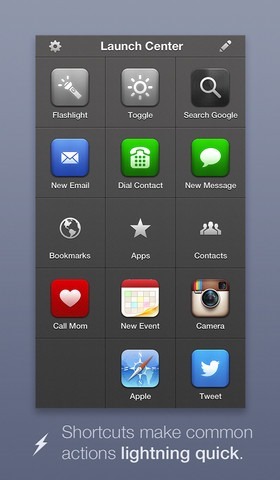 Both time-invested users and those who are potentially new to the App Cubby’s creation will be pleased to see the 1.1 update land with a number of additional actions being included. A couple of new in-app messaging options have been applied, with users now able to invoke group messaging discussions as well as a set of pre-specified text to include when the message is created through the action. Email messaging has also been improved with the ability to attach the last photograph taken on the device to a mail as well as attach directly from copied clipboard data.

Spreading the good word through Twitter seems to be all the rage at the moment so it stands to reason that the last photo taken support has also been added as a tweet action in this update. The power of the clipboard has also been expanded for those who regularly use it to manipulate data with the inclusion of actions that allow text and the last photo taken to be copied to memory on the device’s clipboard. 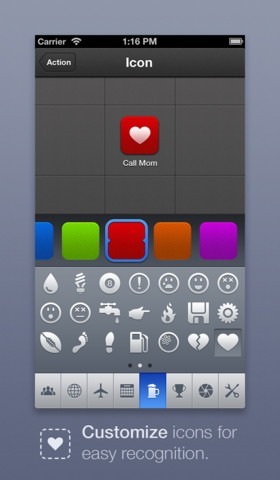 A re-ordered Action Composer process and the obligatory bug fixes and app enhancements finish off this fairly polished and welcomed update. App Cubby are also offering 40% off the regular $4.99 price-tag for a limited time, meaning new users should probably head on over and check it out now at the lower price.