Temple Run 2 For iOS And Android Updated With Usain Bolt As A Limited Time In App Purchase!

The Temple Run franchise has undoubtedly been one of the many success stories of the iOS and Google Play Stores. If you are an owner of an iOS or Android device, and are into mobile gaming then the first and second iterations of Temple Run will more than likely have a permanent home in your ‘Games’ folder. The idea of running through expansive jungle environments while trying to evade being captured by an evil monkey definitely appeals to our primal early-man instincts. But now, things have gotten a little more extreme with an app update that offers gamers the chance to play as the fastest man on the planet – Usain Bolt.

The perilous cliffs, numerous zip lines and overgrown forests are as far removed from Bolt’s usual home of the sprint track as possible, but something tells us that his lightning speed will serve him well when trying to escape from the evils that lurk within Temple Run 2. The release notes of the latest update seem to suggest that Usain Bolt is only the first of a number of future star guests in the Temple Run world, which in itself is great news, but also means that Mr. Bolt will only be available to purchase for a limited period of time.

The world’s fastest man has been added as an in-game in-app purchase that will set users back a bargain $0.99 one off payment. Worry not though, when the celebrity character has been purchased he will be available against the account forever, even after he is no longer available for purchase. Bolt may be unbelievably quick on his feet, but any seasoned Temple Run gamer will know that it takes more than just speed to escape the Evil Demon Monkey, which is where Usain’s special power-ups come into the equation. 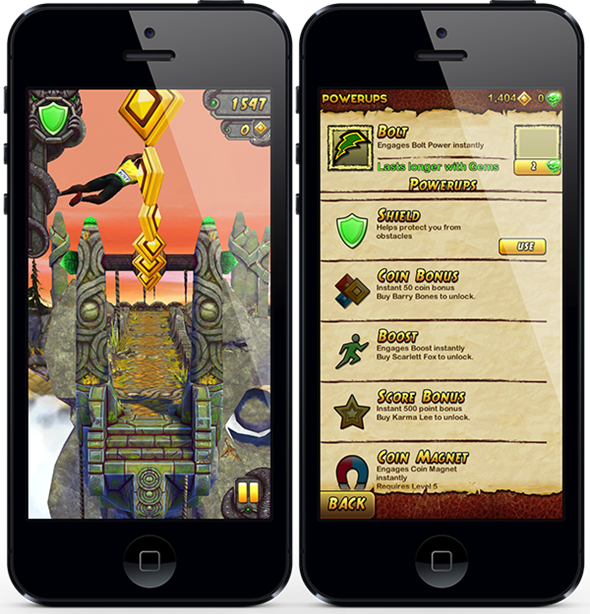 So, just what kind of special powers does the world’s most famous Jamaican sprinter have in a ruined Mayan temple surrounding? An electric ‘bolt’ shield of course. Activating the power will ensure that the celebrity character is not only invincible, but also has automatic course navigations and the ability to magically pull in coins from every position within the environment. If Temple Run 2 is your thing, and athletics is your passion then head on over to the App Store or Google Play Store now for that update.

If you’re a diehard fan of Usain Bolt, then be sure to check out the Bolt! for iPhone game as well.