If you were one of the Android users who found themselves a little disgruntled when Temple Run 2 managed to land on the iOS App Store more than a week ago then worry no more. The official second version of the Temple Run franchise from Imangi Studios is now available as a free-of-charge download from the Play Store, and as you might expect it offers all of the thrills and spills of its iOS flavored brother perfectly tailored for the Android OS.

The majority of Android users who have taken any time to look at what is popular on their platform will be more than familiar with the global smash-hit that was the original Temple Run game. The gloriously themed Aztec-esque infinite running game managed to define a genre of its own in the mobile gaming world and spawned an almost uncountable number of copies, none of which lived up to the original. Imangi has been hard at work since the launch of the original game to bring a sequel that follows the same concepts but that is bigger, better and jam packed with additional peril.

Temple Run is essentially a different take on the same game, with the developers taking the same running, jumping and sliding concept, but packing the game with additional graphics, environments, challenges and even introducing a whole new level of difficulty with curved tracks, perilous rope jumps and an even bigger evil monkey chasing the main character. The graphics and assets that make up the new organic environments are simply stunning and make you feel like part of the action, especially on those high-end devices with beautiful displays. 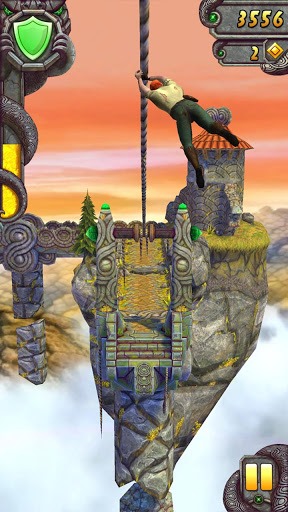 Imangi and their partners have introduced additional obstacles that manifest themselves through broken bridge jumps, randomly placed stone walls, free-falling rope jumps and let’s not forget the almost mutant sized monkey that’s on our tails the whole time. Additional power-ups are available to collect throughout the game – as well as in-app downloads – and each character having their own special powers that can be invoked at certain points throughout the game. 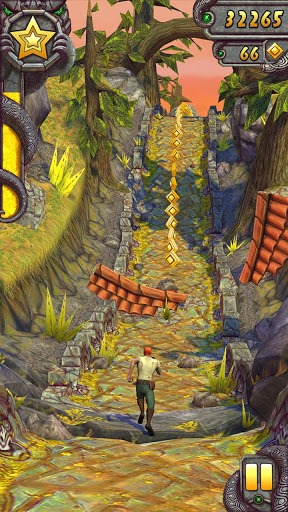 The original Temple Run may have amassed over 170 million on the Play Store but something tells us that Android users will be download the sequel by the bucket load.