Do you remember the Sony PocketSation? Nope? Well it has been 14 years since it was announced and 11 years since it was laid to rest by the Japanese company so we won’t judge you for not keeping it in your thoughts. The unfortunate looking Sony device was an original PlayStation accessory that was sold as a combination of a Memory Card and a personal digital assistant. It came with an LCD display, infra-red connectivity and even a clock. We haven’t had to apportion any of our thoughts to the PocketStation for over a decade, but a very bizarre Sony teaser could suggest that the company is planning a revival for the device in time for the PlayStation 4 arrival.

The device was only actually released to the Japanese market in 1999, meaning that European and US based consumers never officially managed to get their hands on the little piece of kit. That could potentially explain why it had such a short shelf life and was killed off by Sony only three years later. As part of the potential revival Sony has released a rather bizarre video ad that is shot in the style of an on-scene news bulletin that quickly seems to descend in fast-paced action chaos. 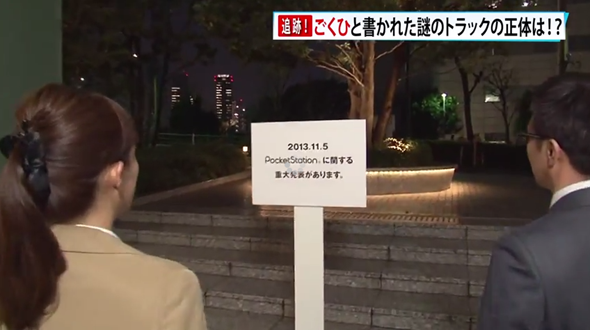 The news anchor and the executive that she is interviewing jump into a chauffeur driven vehicle and chase a suspicious looking articulated lorry down a motorway. The four-minute long video contains vehicle based peril, a life-sized cuddly PlayStation game character and even has some marinated chicken thrown into the mix for good measure. However, the important aspect of the teaser comes in the dying few seconds with a sign that says "2013.11..5 PocketStation". So what exactly will be be seeing this coming Tuesday?

It seems highly unlikely that Sony will make the mistake of attempting to bring the PocketStation back to life through hardware. It seems a lot more feasible for the company to introduce some kind of branded smartphone app or a PocketStation app that has been developed exclusively for their own PS Vita handheld. Whatever the announcement may be it’s shaping up to be an extremely exciting month for Sony, and for the video gaming market in general for that matter.