With Samsung set to launch the Galaxy S6 and S6 Edge in April, the Korean giant has just released a video via its YouTube channel, giving us a quick look at the packaging and the unboxing for both the variants of the device. Head over the jump to catch the details and the video as well.

To be honest, the Galaxy S6 – especially the S6 Edge – has left me intrigued as far as the design and construction of the phone is concerned. I do believe the iPhone 6 is easily one of the most beautiful phones to have hit the market, but the S6 has definitely caught the best of Apple’s smartphone, borrowed design or not. Coming back to that in a while, the video starts off with showcasing of the packaging, which looks to have dropped the faux-wood boxes in favor of white minimal one. 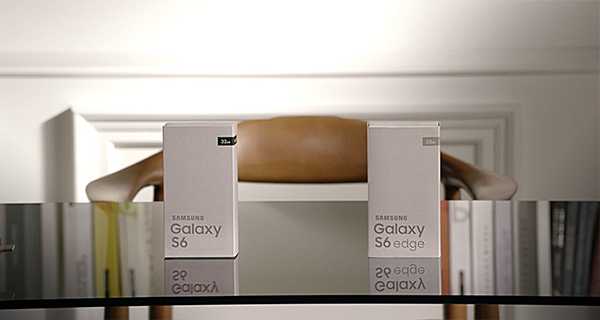 The video then rolls over to a quick unboxing, followed with a quick preview of the S6 Edge’s unique edge-swiping features which includes the Samsung coined ‘People Edge.’ An interesting feature that many hands-on videos of the S6 Edge did not mention at all is how the curved edge works as a beautiful glowing strip for incoming notifications when placed face down on a surface. The video further highlights that the frame on the S6 and S6 Edge is made of Aluminum 6013, which is used in plane construction and is impervious to, you guessed it; bending. Coupled with the Gorilla Glass 4, this is supposedly one tough phone.

The Gorilla Glass usage on the back plays some very appealing tricks on the color of the phone under different lighting angles, and Samsung brings that to our attention in the video stating how the dynamic colors are achieved through this design choice. We have to say it does look pretty sweet, especially the Emerald Green on the Galaxy S6 Edge.

Samsung is not much worried about the bottom housing on the phone resembling the iPhone 6, featuring the headphone jack and a new speaker grill, where Samsung points at telling us that the new speaker on the Galaxy S6 / S6 Edge is much louder and richer than any Samsung phone before it.