On Monday, Samsung looks set to unveil the Galaxy S5 at the Mobile World Congress in Barcelona, but what with the showcase event falling on the last week of February, it had been anticipated that the device wouldn’t retail until early March. However, O2 Germany might have let the cat out of the bag by hinting in a mailing list ad for the upcoming smartphone that it will hit shelves end of February, and with an image of a handset submerged in water also supplementing the feature, this could be construed as an indication that the Galaxy S5 will also be waterproof.

Of course, since many of O2’s ad campaigns feature water, bubbles, and other aquatic effects, it’s hard to glean much from the image itself, but the rest of mailing list ad, which invites interested parties to enter their contact details and be informed as and when the Galaxy S5 makes its eagerly-awaited introduction, is certainly of interest.

In particular, the little circular red badge, which reads “Ende Februar mehr erfahren.” Although my German isn’t quite what it used to be, this essentially translates to “Learn more at the end of February,” and although this doesn’t necessarily mean that the handset will be available before the month’s out, it’ll no doubt have prospective Galaxy S5 fans more than a bit excited.

Regardless, carriers worldwide will likely be making similar moves, trying relentlessly to promote and advertise the latest of a range of devices that have served as the flagship of Google’s Android. Even if it’s not to be available before the end of February, Samsung demonstrated with the Galaxy S4 that its turnaround time between announcement and retail, so whatever happens, expect the likes of O2 and other major carriers to begin taking pre-orders as of the next few days. 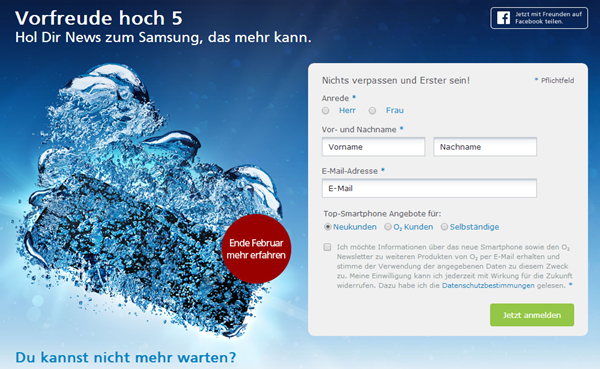 From what we’ve gathered, we’ll be seeing two new handsets from Samsung, the more powerful of which could boast a 2K display, 3GB of RAM, a 3000+ mAh battery, and 32GB of basic storage. Reports also suggest there’ll be a 16-megapixel camera on the flagship model, but this, as well as the other specs, seem to vary depending on where you look.

Hopefully, we’ll get a few more solid leaks before Monday morning, and you can be sure that when they hit the blogosphere, we’ll have it covered right here at Redmond Pie.