What The Samsung Galaxy S5 Will Most Likely Look Like [Image]

We’ve seen a plethora of leaked information that speculates on the potential technical specifications of the future Samsung flagship device, as well as conjecture surrounding the integration of a new external shell and an overhauled TouchWiz UI. “Sources familiar with the situation” have managed to furnish our inquisitive minds with pretty much everything we need to know about the Galaxy S5, except for an actual image that shows the aesthetics of the phone. That could all be about to change thanks to the latest Galaxy S5 concept that could be the most accurate we have seen yet.

South Korean based website Move Player has previous form when it comes to predicting and visualizing what future Samsung smartphones will look like. The site has been fairly accurate in the past in putting together all of the knowns and maybes to produce a final concept render that turns out to accurately portray the final product. The designers at Move Player are obviously expecting Samsung to transition away from the previous form factor of the Galaxy S models that we’ve previously welcomed into the market in favor of a more squared approach that will immediately be evident when holding the device.

This latest render to land in our laps predicts that Samsung will maximize the space available for the beautiful Galaxy S5 display by architecting the device with noticeably slimmer bezels that form the frame of the screen. The user-interface shown in the render also moves to pretty much confirm the existence of an overhauled TouchWiz UI, which is something that we’ve been fairly confident about for some time now. Fans of previous Galaxy S models will be pleased to hear that the next release will ship with a physical home button, putting to bed previous rumors that suggested the South Korean electronics giants would remove that option. 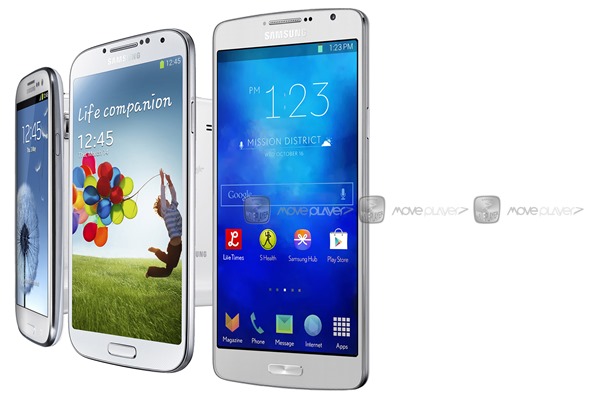 The concept looks like it could accurately reflect Samsung’s next smartphone, but we do need to remember that it is still the work of imagination and educated guesses. A spokesperson for Samsung has previously confirmed that the Galaxy S5 will benefit from a new design when compared to previous models, meaning that this latest concept may not be a million miles away.