It seems that Samsung still isn’t averse to the blatant copying of the work of other companies. It’s been a while since the Korea-based company has been accused of copying Cupertino-based Apple Inc. so it must have thought that the globally-popular CES was the perfect time to showcase a blatant copy of Apple’s Face ID icon in its on-stage presentation.

In Samsung’s defense, the icon presented during its “Age of Experience” presentation on the CES stage wasn’t entirely identical to Apple’s Face ID icon.

It had thicker lines than the original and all of the component parts seem to be slightly closer together than Apple had them but if you were to place the two icons together side-by-side then there would be no difficulties whatsoever in suggesting that the Samsung version had been “inspired” by what Apple had cobbled together.

Given the rest of the icons on Samsung’s slide, it seems that the lines had been adjusted to fit in with the other iconography rather than changing the visuals for any integrity-based reasons. As noted by The Verge, H.S. Kim, Samsung’s head of consumer electronics, was on stage at the time talking about Samsung’s investment in identity protection and how the company handles access to websites and apps via Samsung Pass. The company may be looking to invest in this type of security but it clearly isn’t investing in original artwork and giving designers free rein to create.

Copying, or “borrowing,” from other companies isn’t a new thing and it certainly isn’t limited to Samsung, but the globally famous company does seem to be extremely good at taking guidance from Apple creations. In fact, both companies have been involved in long-drawn-out lawsuits over the years with Apple accusing Samsung of copying its work on multiple occasions. 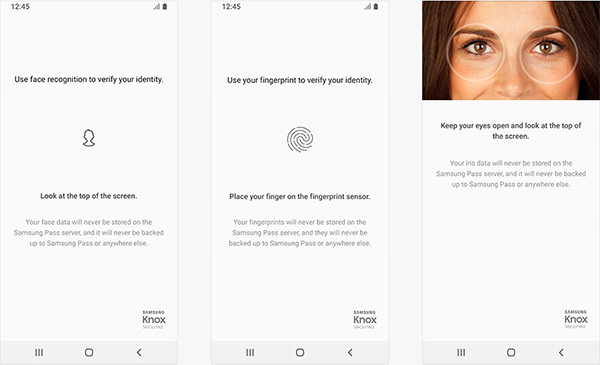 It’s likely that this one won’t go any further as Samsung originally uses a generic outline of a face in it’s facial recognition setup, but it does seem like it could be a move designed to troll Apple rather than the company pulling together an icon that will actually stand the test of time and make it into Samsung software going forward.

Only time will tell on that one.