Samsung has officially announced the date, time and location of its next “Unpacked” event, where it typically introduces the next-generation of Galaxy smartphones. The official 14 second teaser video comes attached with the #TheNextGalaxy promotional hashtag, and confirms that the event will take place on Sunday February 21st at 7PM CET in Barcelona. Samsung is likely taking the opportunity to raise excitement levels for the Galaxy S7 hardware prior to the annual Mobile World Conference (MWC) starting in the city.

Samsung generally utilizes a teaser video as part of an attempt to raise excitement levels for any announcements prior to the company’s Unpacked events. This time around the video opens with an individual sitting at a table instantly donning a set of Samsung Gear VR goggles. The scene then cuts to what is supposedly being seen through the headset as the person reaches forward to interact with a box that has a glowing edges design to give the illusion of the number “7”. That’s likely our clearest indication yet that we will get first official look at the Galaxy S7 during the event. 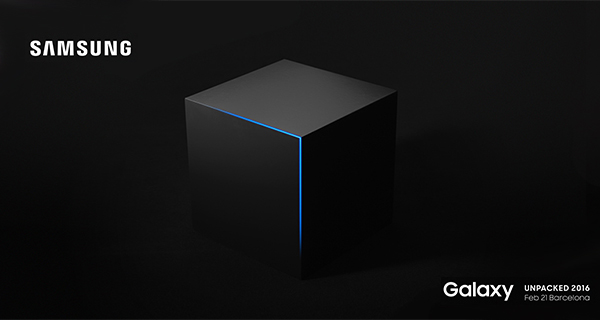 Those with an interest in the workings of Samsung and the devices that it produces, will more than likely have taken an interest in the speculation surrounding the Galaxy S7 over recent months. The general consensus is that Samsung won’t deviate too far from the existing aesthetics of the Galaxy S6 and S6 Edge. The South Korean company clearly feels that it has had enough positive feedback on the existing design to feel comfortable with it for another twelve months. The hardware is slated to pack a number of notable improvements, however given the flagship and premium nature of the device, it wouldn’t be much of a surprise.

Samsung is expected to reintroduce a microSD slot into the Galaxy S7 so that owners can expand the storage capabilities of the device should they require. Additional expected features for the Galaxy S7 also include a pressure-sensitive display similar to the iPhone 6s, the integration of USB-C, and a water resistant structure. There’s also increasing speculation that Samsung will adopt Qualcomm’s new Snapdragon 820 processor series in certain models of the phone. At the moment a lot of this is purely speculation, but at least we now have an official date for witnessing the launch of #TheNextGalaxy.