2016 is shaping up to be a very interesting year for smartphone loving individuals who prefer to allow Android and Samsung to handle their needs. Recent speculation has suggested that Samsung will use 2016 to introduce not one, not two, but three variants of its new flagship device, the Galaxy S7, each with a different processor. Two of those purported devices are alleged to carry Samsung’s own Exynos chips, while the other is speculated to ship with an integrated Snapdragon 820 processor. We’re also apparently being given a look at how those devices perform via leaked benchmark results.

Those who regularly pay attention to this kind of thing will probably already know that benchmarks allegedly belong to one variant of the Galaxy S7 leaked onto the web back in October of this year. It was later identified that the device in question was running one of Samsung’s own Exynos 8890 chipsets. That device, running that particular processor, managed to rack up a respectable single-core and multi-core score of 2,294 and 6,908 respectively. Admirable results for a device that was still months away from an official release. Now, it seems that the results from the Snapdragon 820 powered Galaxy S7 variant have appeared as well.

The benchmark results, which apparently come from the S7 version carrying the Snapdragon 820 SoC, have been leaked to the world via Chinese micro-blogging site Weibo and allow for some immediate and initial comparison between the two device variants. The leaked information shows that this version of the Galaxy S7 manages a single-core score of 2,456 points, and a multi-core score of 5,423 points. It’s evident that those purchasing this model can expect a slight increase in performance on a single-core level, but can also expect to lag behind the Exynos variant on multi-core tasks. 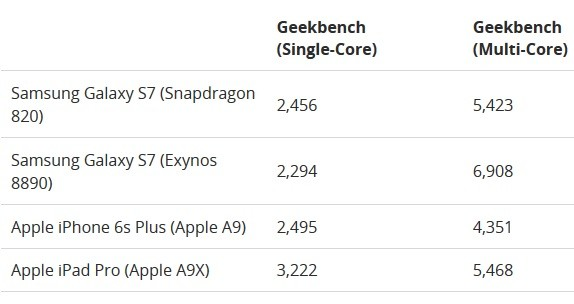 Of course, it’s also pertinent to make it clear that benchmark results aren’t necessarily an indication of how the device will perform when used out in the real world, so that should be taken into account when deciding on your purchase. Samsung is also touted to have been involved in ditching the ARM stock designs of CPUs in favor of their own custom CPU cores in these chipsets. The Snapdragon variant of the S7 could involve a specialized thermal heat pipes design for increased performance, but that’s just speculation for now.

For a little additional clarification on the various models, it’s being suggested that Samsung’s Snapdragon 820 carrying Galaxy S7 will launch in the USA and China, with the Exynos variants making its way to Korea, Japan, and European regions when the device is finally available for release.