The release of the iPad Pro has introduced a little bit of the green eyed monster in a lot of people. It’s not just the sheer size of the 12.9-inch new iPad that has people’s imaginations wondering whether it’s the device for them, but also the underlying technical specification that makes it a cut above the rest of Apple’s iPad range, and the rest of the tablet market in general in all honesty. If you’ve ever wondered how it would perform against the iPad Air 2, one of the iPad mini devices, or even the original iPad released five years ago, then wonder no more as a new video has you covered. The video entails a speed test of every iPad ever released by Apple.

Speed test videos that show off reaction times and app loading times on an array of devices are ten a penny on the Internet. Whenever a large manufacturer releases a new flagship device it’s almost inevitable that a video will be uploaded within hours that shows off how that device compares to competitors in the market. With that said, it’s extremely rare to see a video of this nature, one which shows how an iPad Pro stacks up against every single iPad tablet that has been released before it. 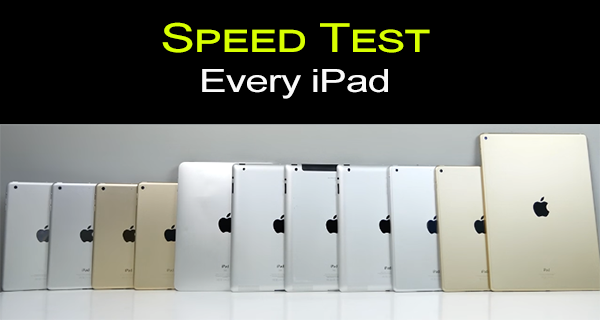 Rather than run through a test of loading and relaunching apps from multitasking, this particular speed test focuses on a select few areas that users go through and notice on a daily basis with their iPad. The video tests each iPad on the time taken to unlock the device from the lock screen, how long the device takes to startup from a cold start, how long it takes to shut each iPad down, and finally, the network speeds of each device on a Wi-Fi network tested using the Speedtest.net app from the iOS App Store. This should give a good indication of how Apple has improved – or let slip as the case may be – the network capabilities of the iPad over time.

There’s also a cheeky little viewing of each of the iPad’s Geekbench 3 scores at the end of the video, which clearly shows that Apple has continued to make impressive improvements to the iPad with the release of each generation. Check it out for yourself and see how your iPad compares against the other models.