Incase you haven’t already heard, the highly-anticipated iPad Pro can now be ordered online via Apple.com. After officially being introduced at Apple’s iPhone-centric September event, the 12.9-inch iPad is amongst us. Excitement surrounding the iPad Pro may be at an accelerated level, but it’s also worth remembering that this isn’t the only iPad in Apple’s range.

As you might expect, Apple is extremely keen to market and push the iPad Pro to as many customers as possible, specifically those in the enterprise and educational sectors. As part of that marketing push, the company’s official website has a comprehensive comparison chart that pits the new hardware against existing iPads in the range, specifically the iPad Air 2 and the smaller fourth-generation iPad mini. Apple’s comparison charts are always a great way of getting official technical and marketing information about a specific device, but it also makes for a good reading for iPads fans out there looking to check the progression of Apple’s tablets. 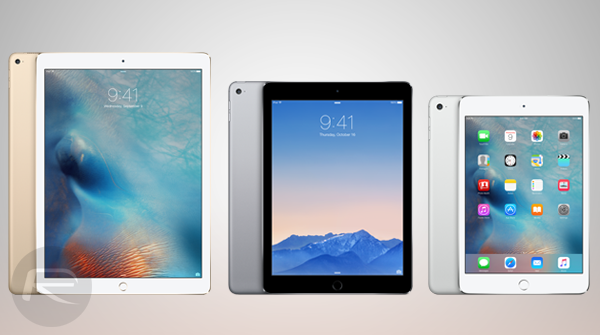 The most notable difference with the iPad Pro in the specs department is the physical size of the tablet itself. Apple has deviated from the 9.7-inch display of the iPad Air 2, and the 7.9-inch display of the iPad mini 4 in favor of beautiful 12.9-inch Retina HD offering. The underlying technology that is built into that Retina display, such as the existence of anti-reflective coating, remains the same as the existing two models. One of the biggest improvements, and one that will ultimately end up satisfying power users, is the inclusion of Apple’s A9X processor and the accompanying M9 motion coprocessor along with 4GB RAM onboard. That chip integration should see the iPad Pro able to execute tasks approximately 1.1-times faster than the iPad Air 2, which packs the A8X chip. The mini 4 has also gotten a significant performance bump with the A8 processor – the chip found in last year’s iPhone 6 and 6 Plus.

It’s immediately evident that the iPad Pro, with its pressure sensitive Apple Pencil stylus and Smart Keyboard attachment accessory, won’t be everyone’s cup of tea. The size of the device deviates from what a lot of users would call a “traditional” tablet, and the price of the hardware could be enough to force the everyday user into opting for one of Apple’s smaller and cheaper, albeit less performant, tablets. Check out the chart below for a complete, official comparison chart of the three mentioned iPad models.