Back when I was younger, the mouse was something you put your hand on and used to move the pointer around. That was all it needed to do and that, as a result, was all that it did.

Nowadays, things are different. Gaming mice are things that the more discerning players have to have. But they all have one problem – your hand gets super warm during play sessions. 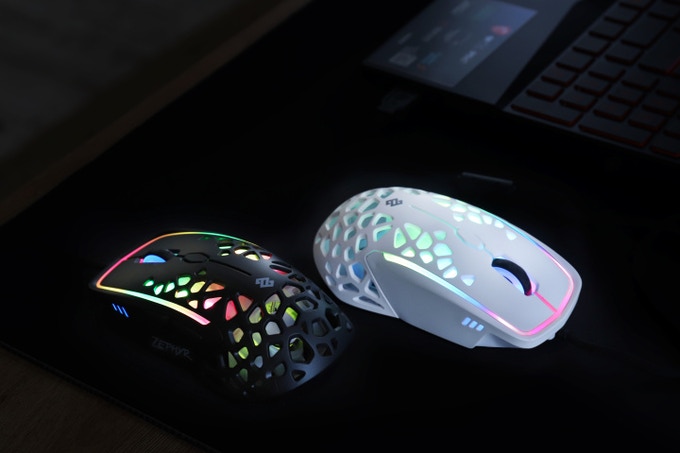 Unless you have a mouse that can cool it down for you. Like the Zephyr Gaming Mouse. And I’ve spent the last couple of weeks with one.

I was sent a prototype device to try out. Mine was white, but there’s also a black version for those who want something to match the rest of their setup. Matching keyboards with fancy LED lighting systems isn’t a problem either, because this mouse has lights of its own. They’re cool if you like that kind of thing. It isn’t for me, but I know I’m the odd one out here.

Being a gaming mouse, we need to have the right number of buttons and the right sensitivity, too. Starting with the latter, the Zephyr Gaming Mouse has five different settings all the way up to 16,000 DPI. That should be plenty for most people, that’s for sure. All five buttons are nice and clicky, and I’m told they’re good for 50 million clicks. That sounds like a ton, so I’m sure they won’t be a problem. Plus, if you’re like me, you’ll probably go through the mouse much more quickly than you can break its buttons.

The real star of the show here, though, is that fan that’s there to keep your hand cool. At first that sounds like nothing short of a gimmick, but amazingly, it seems to work. And it isn’t too loud, either.

With adjustable fan speeds ranging from 4,000 RPM to 10,000 RPM, users can choose between quietness and fan performance and even if you go full speed, the chances are you’ve got headphones on anyway. You won’t hear a thing.

My hands can get fairly moist at the best of times and this fan has done a good job of keeping my palm from sweating up a storm. Sweaty hands are bad news in terms of keeping hold of a mouse so this is absolutely more than a gimmick. It’s a feature and, as far as I can see, it works.

Finally, there’s price. The Zephyr Gaming Mouse is up on Kickstarter now, starting at $79. It isn’t the cheapest mouse on the market but then again, you can spend way more than this. And you won’t get a fan with the others, right?!

Wrapping up, I’m impressed with the Zephyr Gaming Mouse. The unit I had was a prototype and it felt pretty solid. I’d expect the shipping product to be even better. I’d recommend it to anyone, especially fellow sweats!