As much as we love the iPhone, and iOS in general for that matter, we are perfectly able to concede that it has some pretty basic flaws that wouldn’t take Apple long to resolve if they saw fit. There are certain aspects of interacting with native apps that often leave us feel infuriated, with the Camera app and the way Apple has chosen to handle the LED flash being a prime example of this frustration.

We’ve seen many a great tweak landing on Cydia that enhances the Camera app over the last few months, but the Record ‘n’ Torch package is most definitely one that we have been waiting for. This particular package is yet another offering from the recently prolific developer poomsmart, and is yet again another camera based integration that simply allows users to get constant access to the LED flash activation button. And yes, constant does mean even when the device is in a recording state.

I’ve lost count how many times I’ve been recording a video of something using the native Camera app only to find that lighting conditions have suddenly dropped, or turned poor, to put it in simple words. The problem has always been that it is then impossible to dynamically toggle the flash on and off when the device is in the recording state. The only solution in the past has been to stop recording, turn the flash on and then attempt to carry on where you left off, which I’m sure we can all agree just isn’t ideal at all. 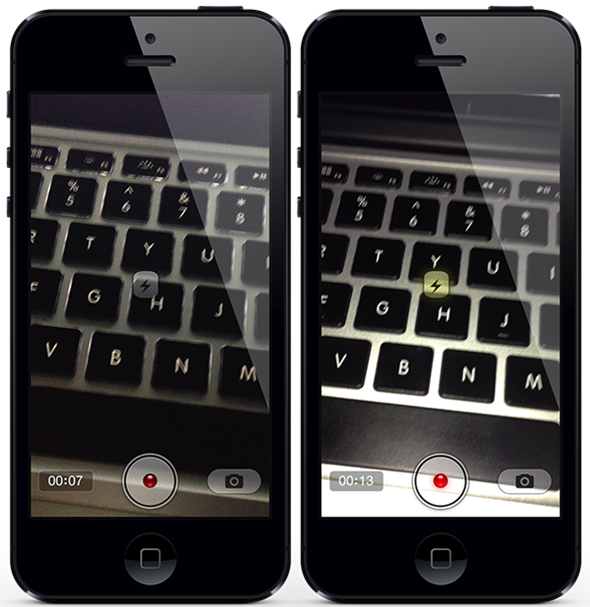 Record ‘n’ Torch offers a relatively simple, but elegant solution by adding a new flash button to the device interface when recording has begun. Unfortunately, it hasn’t been possible for the developer to simply get access to the native button, but he has instead opted for a functional option that even allows the user to drag the flash toggle button around the screen using gestures. Install the package, start the video recorder, drag the button to where you want it and tap to turn the flash on and off. Simple, effective and a perfect near-perfect solution.

Record ‘n’ Torch is available as a free-of-charge download from the BigBoss repository and is compatible with the iPhone 4, iPhone 4S, iPhone 5 and iPod touch fifth-generation running iOS 6.0 or above.