PwnTunes For iOS 9 Released: Copy Files On iPhone To And From PC Without iTunes

It seems like it’s been quite a while since the community was awash with jailbreak chatter. The excitement that initially surrounded the surprise launch of Pangu 9 has since been diluted by the fact that Apple has made iOS 9.1 available, complete with patched vulnerabilities that allowed the untethered jailbreak solution to be put in place on iOS 9.0/9.0.1/9.0.2. The updating of prominent and popular tweaks and extensions, such as the updated PwnTunes for iOS 9, will need to appease those jailbreak fans for the time being until we hear more about the long-term prospects of a jailbreak going forward.

PwnTunes is an extremely popular jailbreak offering which gets a lot of attention, and rightly so. The initial introduction of PwnTunes was more than welcomed by a jailbreak community which was looking to shed the shackles of limitation that Apple has placed upon its devices and iTunes. The feature set immediately resonated with iOS device owners who longed for the freedom of being able to sync music and files with a simple drag and drop style functionality. Four years later we’re up and running with iOS 9, and a new version of PwnTunes to match. 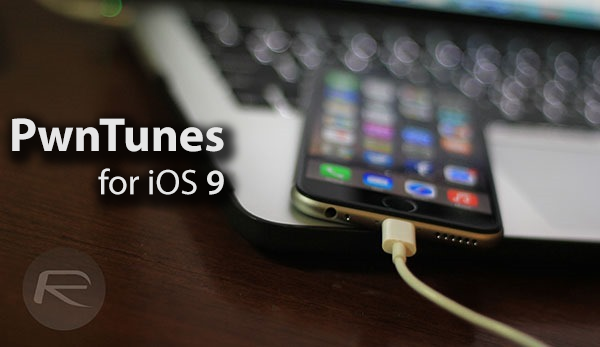 One of the great features within PwnTunes for iOS 9 is that it simply allows you to entirely step away from iTunes if you don’t have access to the software. Music files can be dragged and dropped to import or export them onto a device with PwnTunes for iOS 9 installed. Not only does this negate the need for iTunes to be a part of the process, but it also means that music from multiple libraries and computers can be added to the device without any insane synchronization limitations. The capabilities also extend beyond just music and music files. 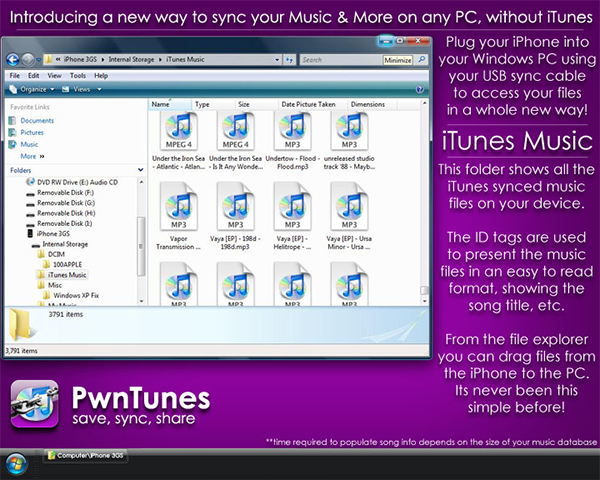 Rather than having to go through the often convoluted process of backing up and syncing photos and videos, PwnTunes makes it possible to instantly drag and drop photos and videos from the device to a PC, or from a PC directly to the Photos app on the iOS device. That ability to easily important export files from the device into specific apps is important, but it’s potentially the fact that the PwnTunes also turns the iPhone into portable hard disk for all file types that is one of the tweak’s lasting unique selling points. 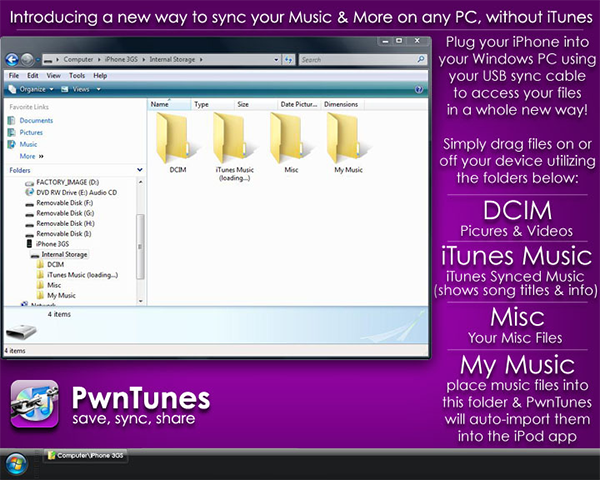 PwnTunes for iOS 9 is available right now on the BigBoss repo in Cydia as a very worthwhile $12.99 purchase.